Ethel’s is a tavern in Highland at 620 Broadway Street. Named for longtime owner Ethel Hirsch, the business has served Highland residents under various names since the end of Prohibition in 1933. It is known for “Ethel’s Bucket,” a mixed drink served in a bucket.

In the 19th century, another establishment was located at 620 Broadway Street: the St. Louis House, a tavern and hostelry first owned by Wesley Dugger and later by John Menz, Sr.1 The St. Louis House was destroyed by fire in 1913. The day Prohibition ended, December 5, 1933,2 the first owner of the establishment, Edwin H. “Kid” Walter (1900-1955)3 took ownership under the name Kid Walter’s Place, making Ethel’s the owner of one of the oldest liquor licenses in Madison County.4 Kid Walter also owned a package liquor business in Highland at 806 Broadway Street named Walter’s Liquor & Sporting Goods Store.5  Kid Walter’s Place was built on the site of The St. Louis House and was attached to the National Trail Garage also occupying the previous site of The St. Louis House.6

On April 1, 1952 Kid Walter’s place was purchased by Delmar “Jim” Hirsch (1908-1968)7 and Ethel Hirsch (1915-2001).8 Kid Walter retired on his farm southeast of Highland until his death three years later on February 20, 1955.9 Jim and Ethel Hirsch renamed the establishment Hirsch’s Tavern and ran it together for 16 years until Jim’s death on August 1, 1968.10 Prior to owning Hirsch’s Tavern, Ethel worked for Michael’s Restaurant and Moulton-Barely Shoe Factory.11 Jim previously worked for Highland Dairy and Highland Supply.12

After Jim’s passing in 1968, Ethel become sole owner and operator. Under her management, the tavern became well known in Highland and beyond for Ethel’s Bucket, a mixed drink served in a small bucket for sharing. The Bucket includes six shots of alcohol, but other than that, the secret to the Bucket is heavily guarded.  Party buses and wedding parties would come from all across the region to sample Ethel’s Bucket and to participate in the many wedding traditions established by Ethel.13 One of these traditions Ethel began was to clear the bar area when a wedding party arrived, allowing the party sole access to bar seating. After running the tavern for almost fifty years, Ethel fell and broke her arm two days before her 86th birthday.14 Her health quickly declined after that accident until her death on March 15, 2001. Hirsch’s Tavern was then passed to Ethel’s employee and longtime friend Susie Pfister who is now the current owner. Susie has kept the legal name Hirsch’s Tavern, Inc. but added a “doing business as” (DBA) of Ethel’s to honor her friend.15 The traditions and memories of Ethel are still a part of the establishment, including another type of “bucket” developed by Susie. This additional drink, called the Tropical Bucket, complements the experience with an alternative to the enjoyable, traditional Ethel’s Bucket. 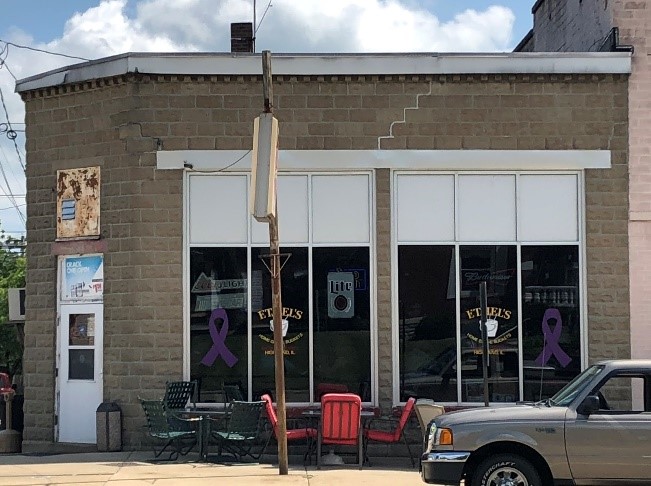 Ethel’s in 2018
Photo by Darren Latham

Cite this article: Darren Latham, "Ethel’s in Highland," Madison Historical: The Online Encyclopedia and Digital Archive for Madison County, Illinois, last modified February 5, 2019, https://madison-historical.siue.edu/encyclopedia/ethels-in-highland/.
We are always committed to accuracy in our articles and archive items. If you notice a mistake or have a suggestion, please contact us.