Horseradish (Armoracia rusticana) is a European perennial root vegetable commonly used as a condiment. In Illinois, this specialty crop is mainly grown in the American Bottom with St. Clair, Monroe, and Madison Counties having the most concentrated commercial growth of horseradish in North America.1  There are many horseradish farms and production facilities in Madison County, especially in and around the city of Collinsville.2 Due to this, Collinsville is the self-proclaimed “Horseradish Capital of the World.”3 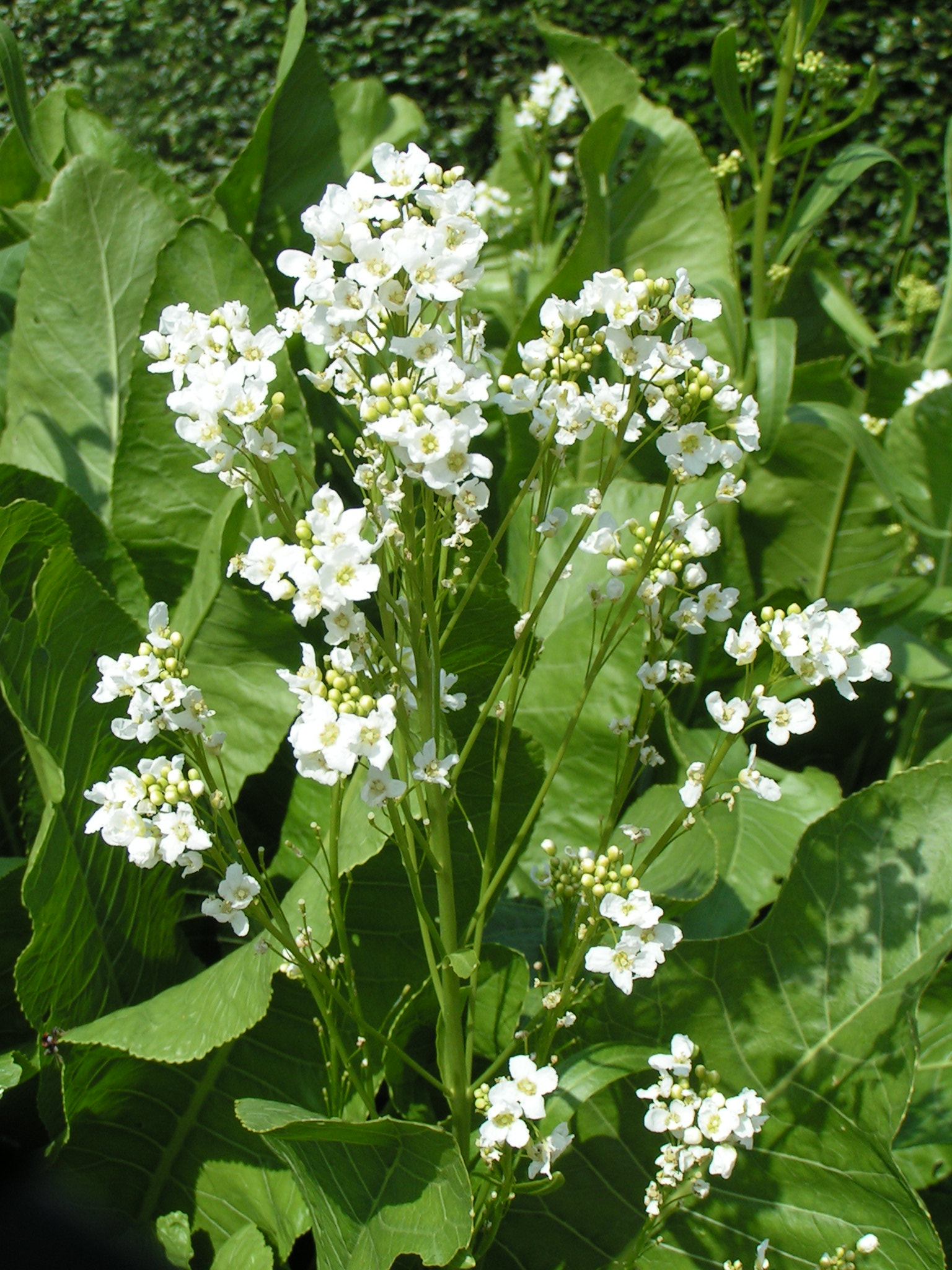 The American Bottom, also called the American Bottoms, is a Mississippi River floodplain in southern Illinois which extends from Alton south to the Kaskaskia River. This area is ideal for growing horseradish because the soil is sandy, loose, and rich with nutrients, such as potash, from centuries of flooding.4 Horseradish grown in and around the Collinsville area is highly desirable because the potassium-rich potash gives horseradish extra heat.5

Horseradish is a European root vegetable that belongs to the genus Brassica of the mustard family (Brassicaceae), which includes cabbage, broccoli, radish, cauliflower, turnips, and kale.6 It is a perennial crop, which means it comes back year after year.7 The flowers of the plant have four petals and resemble a cross.8 The leaves of the horseradish plant are thick, leathery, can be quite large, and grow bunched together, much like dandelions.9 The leaves are dark green, crinkled, and prevent most insects and animals from eating the crop.10 Although the leaves of the plants are edible, it is the root that people prefer to eat. The hardy, white root is covered in a thick brown bark and usually grows eight to twelve inches in length and about an inch wide before it is harvested.11 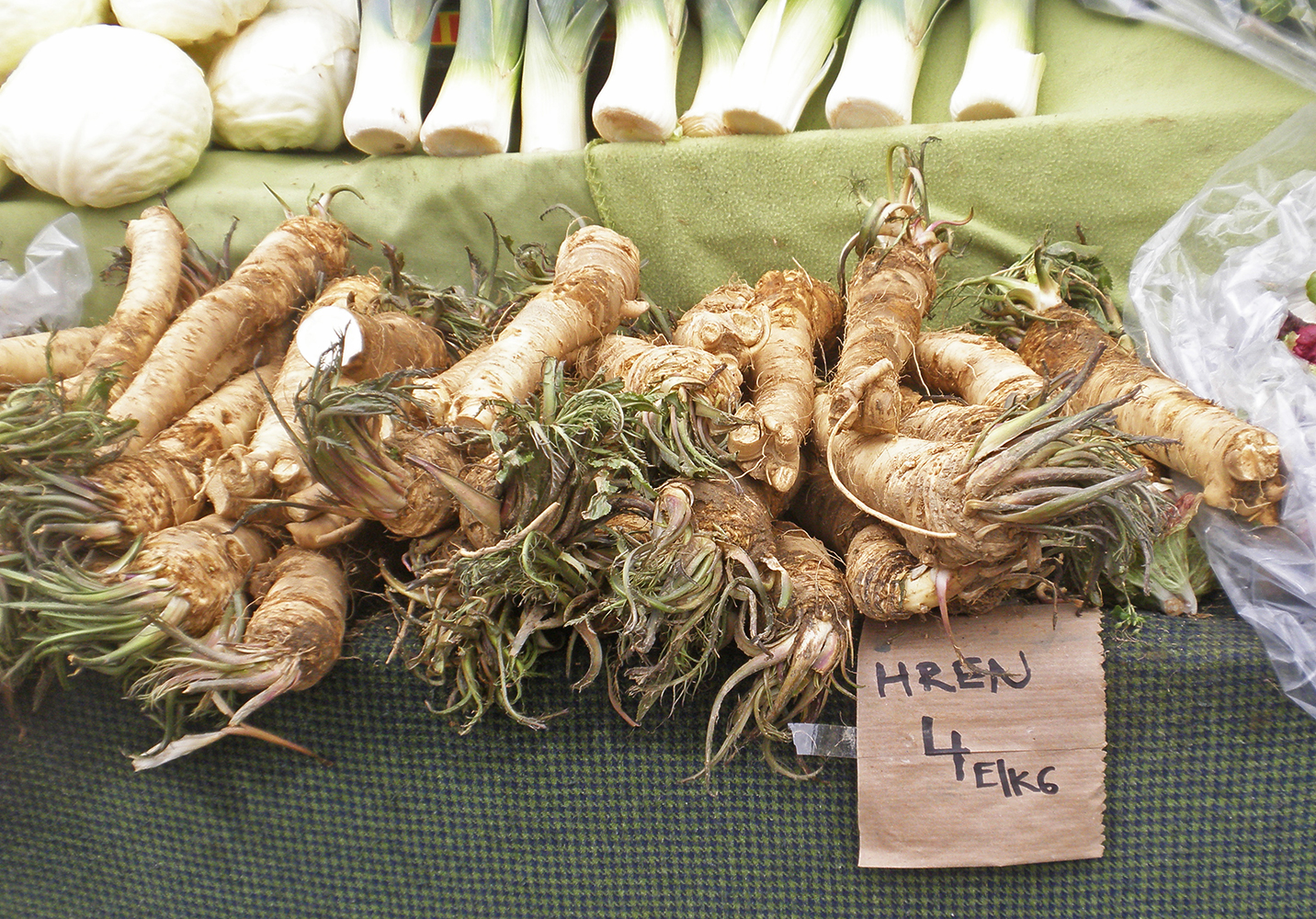 Horseradish roots for sale in Ljubljana, Slovenia
From Wikimedia Commons

Farmers plant horseradish in the early spring and harvest it in the late fall after the first frost.12 It needs long summers for growing and cold winters for dormancy.13 It is a labor-intensive crop as there are no modern machines built specifically for planting and harvesting it. Some farmers have modified potato harvesters to help with the labor, but most of the planting and harvesting is still done by hand.

After the root is harvested, it is cleaned and graded for size and quality.14 The roots are crated and stored in freezers until they are sold and shipped to produce companies and food processors around the world.15 The processors will grate the root which releases the pungent smell and taste.16 They mix the grated root with vinegar to stabilize it, so it is not as hot in flavor, and also to preserve it, so it will not turn brown and bitter.17 Different procedures add salt, sugar, cream, or vegetable oil, but usually the prepared horseradish on the market only contains the grated root mixed with vinegar.18

Commercial horseradish farming began in the fertile American Bottom around the 1850s by immigrant German farmers.19 It is believed that the first two families to farm horseradish in the Collinsville area were the Fingerhut and Bruns families, both of which were German.20 By the late 1890s, the horseradish industry was thriving in the Collinsville area.21 Many farmers passed down their land and knowledge to their children, so many modern farmers in the region are at least third-generation farmers.22

As the self-proclaimed “Horseradish Capital of the World,” Collinsville has hosted the International Horseradish Festival every year since 1988.23 The festival offers horseradish root games and contests, such as Root Toss, Root Golf, and Root Sacking.24 Both the roots and processed horseradish are sold at the festival. Notably, special batches of horseradish are produced about a week before the festival and sold without preservatives added. This offers a unique chance to buy the freshest and hottest horseradish possible.25 Multiple demonstrations are held throughout the duration of the festival to show how to grind the root and add the correct amount of vinegar to get the desired heat.26 The International Horseradish Festival also offers live music, other food, many events, and crafts.

Cite this article: Angela Little, "Horseradish in Collinsville," Madison Historical: The Online Encyclopedia and Digital Archive for Madison County, Illinois, last modified February 5, 2019, https://madison-historical.siue.edu/encyclopedia/horseradish-in-collinsville/.
We are always committed to accuracy in our articles and archive items. If you notice a mistake or have a suggestion, please contact us.