Louis Latzer (1848-1924), often called “The Father of Pet Milk,”1 helped define the community of Highland as a key producer of dairy goods and commerce. He served as president (1887-1924) of Helvetia Milk Condensing Company (now Pet, Incorporated), which was founded in 1885 in Highland. His leadership and innovative techniques revolutionized the process of milk production and preservation. 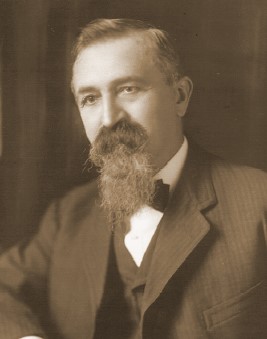 Louis Latzer was born on a farm two miles south of Highland on November 11, 1848.2 His father, Alois Latzer (1808-1891), was a native of Austria while his mother, Margaretha (Gaduff) Latzer (1819-1874), was from Switzerland.3 His parents separately immigrated to Madison County around 1846 and met while living in Highland.4

Louis Latzer was educated at McKendree College in Lebanon, Illinois, and at Illinois Industrial University in Champaign, Illinois (now the University of Illinois at Urbana-Champaign). He later specialized in chemistry through private instruction.5 In 1869, his father returned to Austria6 so Louis Latzer had to leave college to take over the family farm.7

In 1885, Louis Latzer represented Helvetia Township on the Board of Supervisors.10 This was a position he held for eleven years.11

On February 14, 1885, John Baptist Meÿenberg (1847-1914) organized Helvetia Milk Company with Louis Latzer and other local farmers and businessmen.12 Latzer invested as a stockholder in the company and was elected as a founding director.13

As a founding director, Latzer assumed the role of technical director.14 By the end of 1885, the company gained recognition in the area for its canned evaporated milk. It was popular because the can did not need refrigeration until it was opened and the milk had a reputation for helping sick infants.15

In 1886, the company experienced a set-back when a large portion of its milk spoiled, much of it on grocers’ shelves.16 After some debate about whether the spoilage was caused by John Baptist Meÿenberg’s sterilization process or improper sealing of the tin cans, Meÿenberg left the company.17

Dr. Werner Schmidt (1841-1900), a local physician proficient in chemistry, was hired to perform experiments on the spoilage problem. A room in the factory was set-up for this purpose and Latzer spent much time in the lab with Dr. Schmidt.18 They found the spoilage was caused by bacteria and that the solution was to improve the milk sterilization process.19 This was done by obtaining a supply of milk that was uniform and uncontaminated, properly heating and maintaining the temperature of the milk, continuing research into the chemical properties of milk, and by not letting all the air out of the cans.20 Latzer also automated the company’s plants, which led to lower costs, faster production, and safer canning.21

Louis Latzer was elected as the third president of Helvetia Milk Condensing Company in 1887.22 Over the next five years the process of condensing milk was perfected. The company became a huge success as their product became known world-wide.23

Latzer took interest in civic affairs, promoted the good of the community, and was a model farmer.24 In 1889, he served as the Chairman of the Board of Supervisors of Madison County. He also served as highway commissioner for six years and school trustee for twenty years.25

In 1923 Helvetia Milk Condensing Company was renamed Pet Milk Company and moved their main offices to St. Louis.26 Louis Latzer continued to work for the company and maintained an office and lab in Highland until his death.27

For 37 years Louis Latzer ran this innovative and successful business in Highland, Illinois. It brought many benefits to the local community including jobs and outside money to its economy.28

Louis Latzer died on March 27, 1924, and is buried at Highland City Cemetery in Madison County.29 After his death, his children erected the Louis Latzer Memorial Library in Highland in his memory. It was dedicated in 1929.30

In 1977 the Pet Milk Company deeded Louis Latzer’s home and forty acres of his farm to the Highland Historical Society.31 This became the Louis Latzer Homestead which is open to the public for tours and events.32

Cite this article: Angela Little, "Latzer, Louis (1848 – 1924)," Madison Historical: The Online Encyclopedia and Digital Archive for Madison County, Illinois, last modified February 5, 2019, https://madison-historical.siue.edu/encyclopedia/latzer-louis/.
We are always committed to accuracy in our articles and archive items. If you notice a mistake or have a suggestion, please contact us.