Filed in Madison County in 2000, Price v. Philip Morris was the first consumer fraud lawsuit dealing with the use of the word “light” to advertise cigarettes to reach trial in the United States.1 It resulted in a landmark $10.1 billion verdict in 2003 against tobacco giant Philip Morris, Incorporated.4 It stood as one of the largest awards in United States history until the Illinois Supreme Court reversed the verdict in 2005.  Madison County benefited financially from this case because they earned $17.6 million in interest from the appeal bond.2

February 10, 2000, representative plaintiffs Susan Miles, Linda J. McHatton, Sharon Price, and Michael Fruth filed a class action lawsuit against Philip Morris, Inc. in the Circuit Court, Third Judicial Circuit, Madison County, Illinois. There were 1.14 million members of the suit.6 Stephen M. Tillery of Korein Tillery LLC was the lead attorney for the plaintiffs. The Honorable Nicholas G. Byron was the presiding judge over the case.7 At this time, the case was named Miles v. Philip Morris. 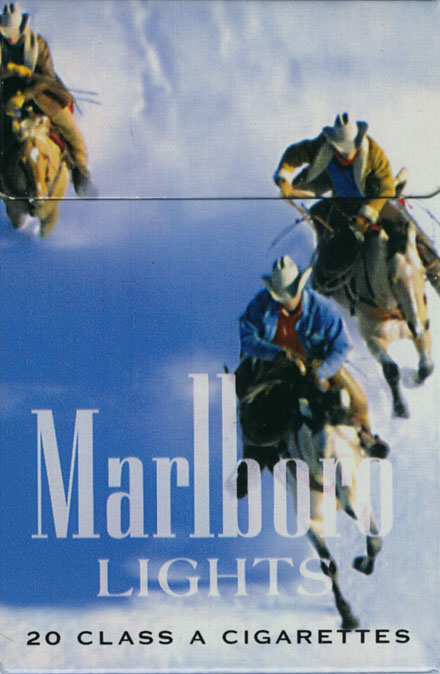 The class action lawsuit filed by Susan Miles, Linda J. McHatton, Sharon Price, and Michael Fruth against Philip Morris, Inc. alleged that Marlboro cigarette packs like this one, labeled “lights,” were misleading to consumers. This pack was sold in 2001.
From Cigarety.by

The case was filed “individually and on behalf of a class of similarly situated individuals.”8 The plaintiffs alleged that Philip Morris violated the Illinois Consumer Fraud and Business Practices Act and the Uniform Deceptive Trade Policies Act. They also “alleged that the defendant’s light cigarettes did not contain significantly less tar and nicotine than regular cigarettes, as they claimed. Any person buying light cigarettes did not get what the defendants advertised. The defendant intentionally manipulated the design of the cigarettes to maximize nicotine delivery while at the same time produce lower machine-measured levels of tar and nicotine.”9

On February 1, 2001, Judge Nicholas G. Byron certified the class action lawsuit. The class was officially defined as “all persons who purchased Defendant’s Cambridge Lights and Marlboro Lights cigarettes in Illinois for personal consumption, between the first date the Defendant placed its Cambridge Lights and Marlboro Lights cigarettes into the stream of commerce through—February 8, 2001.”10

The trial began on January 21, 2003 and lasted until March 6, 2003. The case was renamed Price v. Philip Morris on February 11, 2003 when the plaintiffs were granted their motion for withdrawal of two of the four named plaintiffs.11 Sharon Price and Michael Fruth remained as the representative plaintiffs.

On March 21, 2003, Judge Nicholas G. Byron entered a judgement against Philip Morris in a bench trial. His ruling said that Philip Morris misled customers into believing they were buying a safer cigarette.12 He awarded the plaintiffs $7.1005 billion in compensatory damages and $3 billion in punitive damages to be paid to the state of Illinois for a total of $10.1 billion.13 In addition, he awarded attorney fees in the amount of 25% of the compensatory award.

Philip Morris was required to put up $12 billion before they could appeal the case to cover the $10.1 billion judgement. Philip Morris asked for a reduction in this appeal bond and on April 14, 2003 Judge Byron lowered it to $6.8 billion. On July 14, 2003, the Illinois 5th Circuit Court of Appeals ruled that Judge Byron lacked the authority to reduce it and the bond must remain at $12 billion.14 Philip Morris argued that they could not post the $12 billion dollar bond because it would force them into bankruptcy and threaten their ability to pay other tobacco case settlements.15 Philip Morris appealed the $12 billion decision to the Illinois Supreme Court and on September 17, 2003 the bond was reduced back down to $6.8 billion.16 The appeal bond was placed in an escrow account in the form of a $6 billion promissory note and maintained by the Madison County Circuit Clerk.17 Interest payments were made to the account every six months, plus Philip Morris was required to deposit $800 million in cash to the account which were paid in four quarterly payments. All interest earned on the money placed in this escrow account would remain with Madison County, despite the outcome of the case. 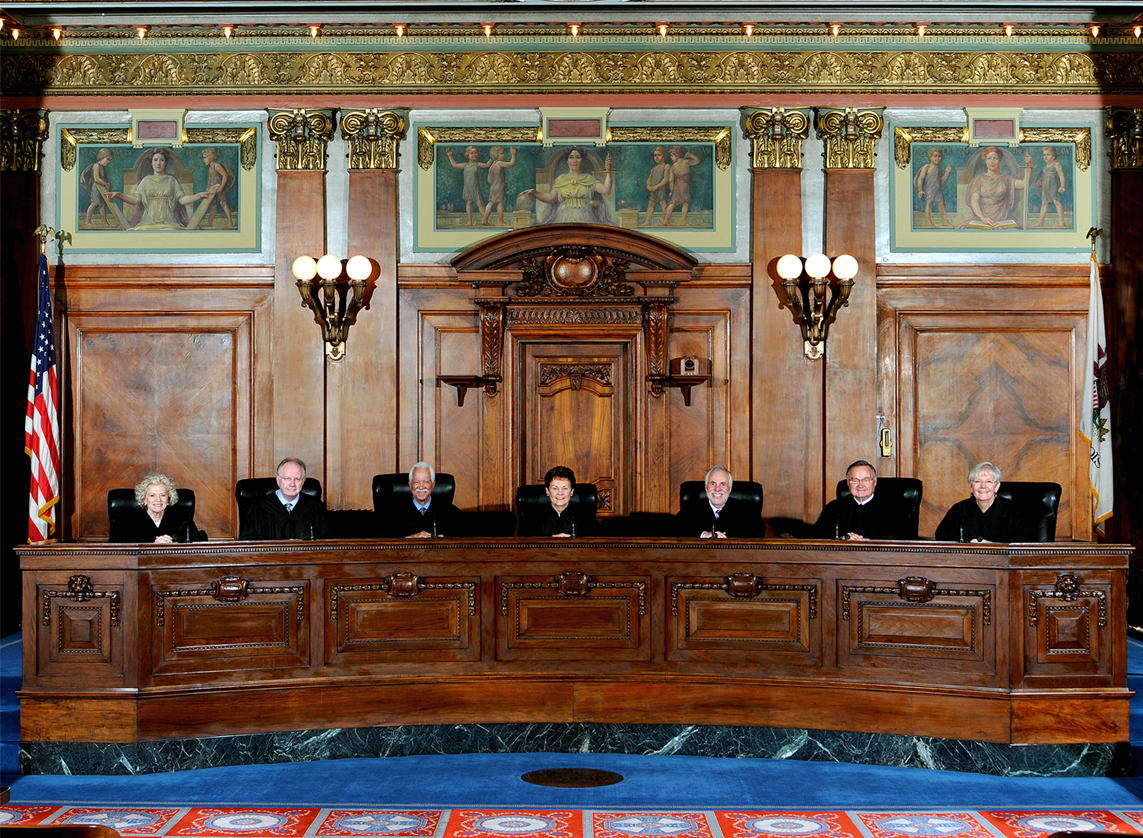 This photograph shows the Illinois Supreme Court in 2015, with most of the Justices of the 2005 court that reversed the judgement against Phillip Morris. From Left to Right: Anne M. Burke, Thomas L. Kilbride, Charles E. Freeman, Chief Justice Rita B. Garman, Robert R. Thomas, Lloyd A. Karmeier, and Mary Jane Theis. Burke and Theis were appointed in 2006 and 2010, respectively. Not pictured from the 2005 court are Thomas R. Fitzgerald and Mary Ann G. McMorrow. In 2005, Robert R. Thomas was the chief justice.
From Illinois Courts.gov

Philip Morris’ appeal bypassed the Appellate Court and on December 15, 2005 the Illinois Supreme Court reversed the judgement. They found that the terms “light, low or reduced” used to describe the cigarettes by Phillip Morris was authorized by the Federal Trade Commission (FTC).18

On June 19, 2006 the Illinois Supreme Court ordered the $2.15 billion in cash that was securing the appeal bond to be returned to Philip Morris.19 Madison County was allowed to keep the $17.6 million in interest it had earned from this appeal bond.20

On November 27, 2006, the U.S. Supreme Court refused the plaintiffs’ request to hear an appeal of the Illinois Supreme Court reversal. In response, the Third District Court in Madison County dismissed the suit on December 18, 2006.

On December 18, 2008, the U.S. Supreme Court ruled in a similar case that the FTC did not authorize use of those terms. As a result, “the Federal Trade Commission (FTC) changed how cigarette makers could describe tar and nicotine levels in advertising and packaging.”21 This allowed the Price v. Philip Morris case to go forward. Three days later, plaintiff attorney, Stephen M. Tillery filed a petition in the Third Circuit Court in Madison County, Illinois. It was dismissed, so they appealed to the Fifth District Appellate Court in Illinois.

On February 24, 2011, the Fifth District Appellate Court sent the case back to the Circuit Court for further proceedings. This ruling was appealed by Philip Morris, but the Illinois Supreme Court declined to hear their appeal.

The case was officially reinstated in Madison County in 2014. On November 4, 2015, the Illinois Supreme Court, after having the case presented to them for a second time, declined to reinstate the judgement against Philip Morris.22

In 2016, the plaintiffs petitioned the U.S. Supreme Court to order the recusal of Illinois Supreme Court Justice Lloyd Karmeier. They alleged that Justice Karmeier’s campaign was indirectly financed by Philip Morris in 2004, and therefore, there was a conflict of interest when the case was heard by the Illinois Supreme Court in 2005 and in 2015.23 On June 20, 2016, the U.S. Supreme Court declined the plaintiffs’ petition for review, which “means all legal challenges have been exhausted in attempt to revive a $10.1 billion judgement approved by Madison County judge Nicholas Byron at a bench trial in 2003.”24 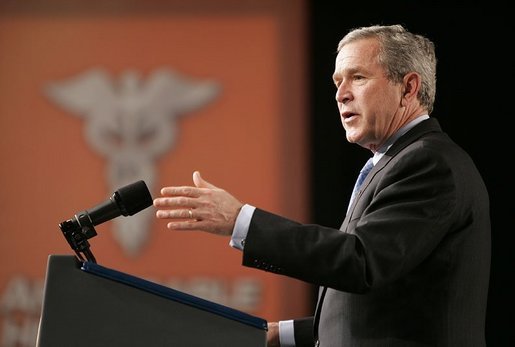 Due to Price v. Philip Morris and other lawsuits in Madison County, President George W. Bush visited Collinsville on January 5, 2005. He gave a speech in favor of Tort Reform legislation that would limit the amount of money awarded in a lawsuit like Price v. Philip Morris.
From georgewbush-whitehouse.archives.gov

Although Price v. Philip Morris is no longer being pursued, there have been other cases involving the use of the term “light” in cigarette advertising. This includes another Madison County case called Kelly v. Martin & Bailey, which also involves the Korein Tillery, LLC law firm. It is a consumer fraud lawsuit which claims that “Huck’s convenience stores unfairly and deceptively schemed to get customers to buy light cigarettes.”26 The suit also names Philip Morris as a defendant. This case was originally filed in 2005 and as of November 28, 2016, it has yet to exhaust all of its legal proceedings.27

Although the Price v. Philip Morris case was legally unsuccessful, the use of the term “light” in cigarette marketing was banned in the United States in 2010. In June of 2010, the U.S. Food and Drug Administration (FDA) banned the use of terms such as “light,” “mild,” “medium” or “low” on cigarette packs.28 The FDA concluded that these terms mislead the public to wrongly think they are less harmful than other cigarettes.29 The FDA considers any cigarette products that are marketed as “light,” “low,” or “mild” without a Modified Risk Tobacco Product (MRTP) order, are committing health fraud.30

For more, see these Oral Histories

Cite this article: Angela Little, "Price v. Philip Morris," Madison Historical: The Online Encyclopedia and Digital Archive for Madison County, Illinois, last modified May 7, 2020, https://madison-historical.siue.edu/encyclopedia/price-v-philip-morris/.
We are always committed to accuracy in our articles and archive items. If you notice a mistake or have a suggestion, please contact us.