The Wicks Organ Company, historically located at 1100 5th Street in Highland, Illinois, was started by John Wick and his two brothers Louis and Adolph in the early 1900s.1 After the company was incorporated in 1908, the Wick family owned and operated in the same facility for three generations, moving in 2017 to a new location across the street which was better suited to their needs as an organ building and transportation company.2 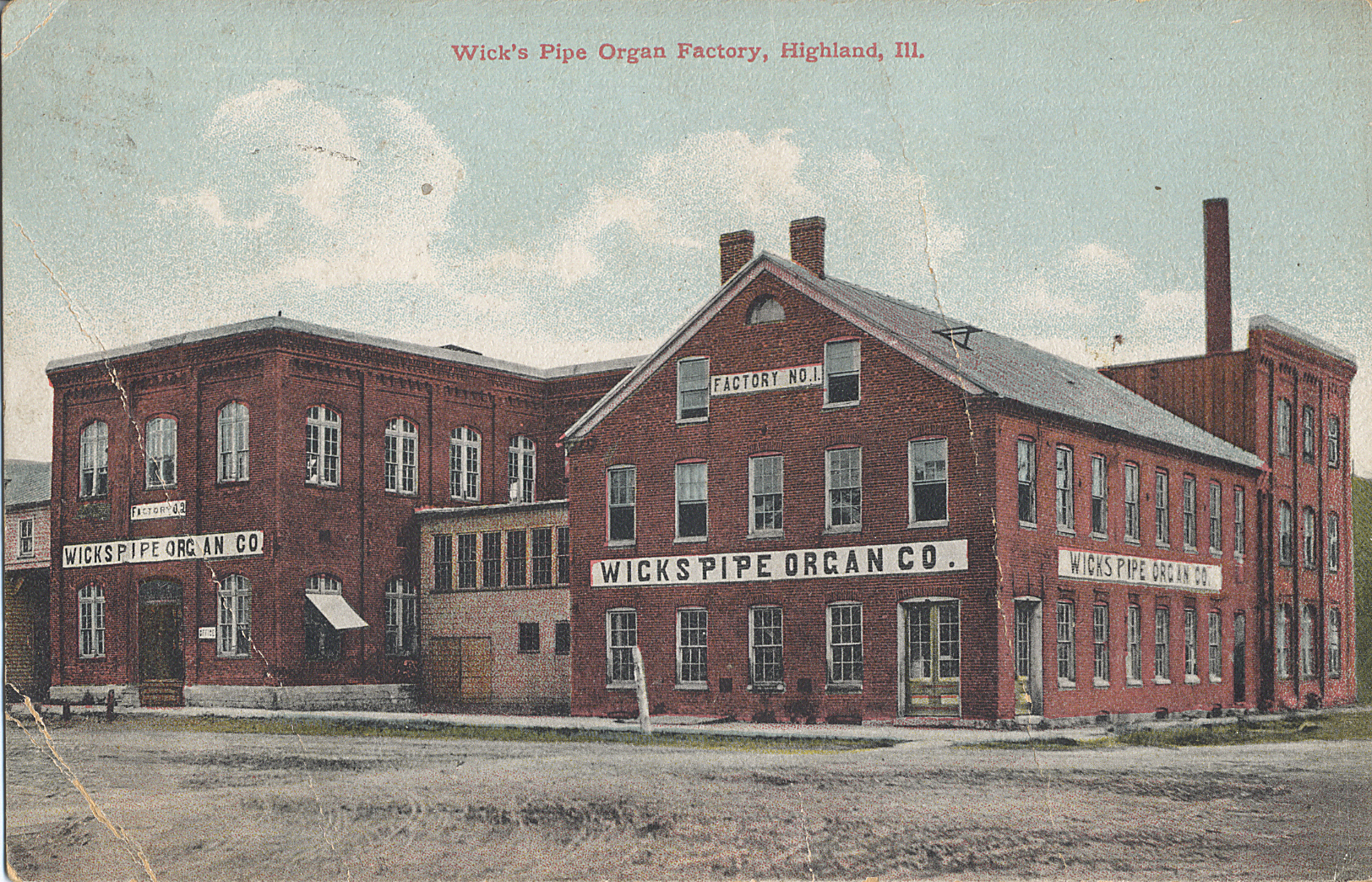 After the Wick brothers had success with their first organ in 1906, they moved into this old factory building in downtown Highland. The factory quickly proved inadequate, and the company built and moved to a new factory in 1910.
From the Wicks Organ Company

In 1906, St. Paul R.C. Church, a Catholic church located on ninth street in Highland, contacted the Wick brothers to ask them to build a new organ.3 The three brothers were, at the time, making watches, cabinets, and jewelry. After the success of this first organ, the Opus One, other churches in the area began to contact the Wicks for their services, leading to the creation of their business, the Wicks Organ Company.4 The brothers and their descendants continued building organs throughout the early 20th century, going on to invent their patented “Direct-Electric” action valve after thirteen years of building pneumatic instruments.5 The system, patented in 1922—and again in 1929 following improvements—included a direct electrical connection from the key to the valve, which eliminated many of the problems associated with pneumatic organs. Mark Wick, former company president, shared in a 2007 news segment about his family’s company, “It’s not affected by temperature, it’s not affected by humidity, and the maintenance savings for churches can be very tremendous over the years because you don’t have to rebuild it like other actions.”6 In their first thirteen years of operation, before the implementation of “Direct-Electric,” Wicks built 275 organs. In the following fifteen years, Wicks’ opus list increased to more than 1000.7 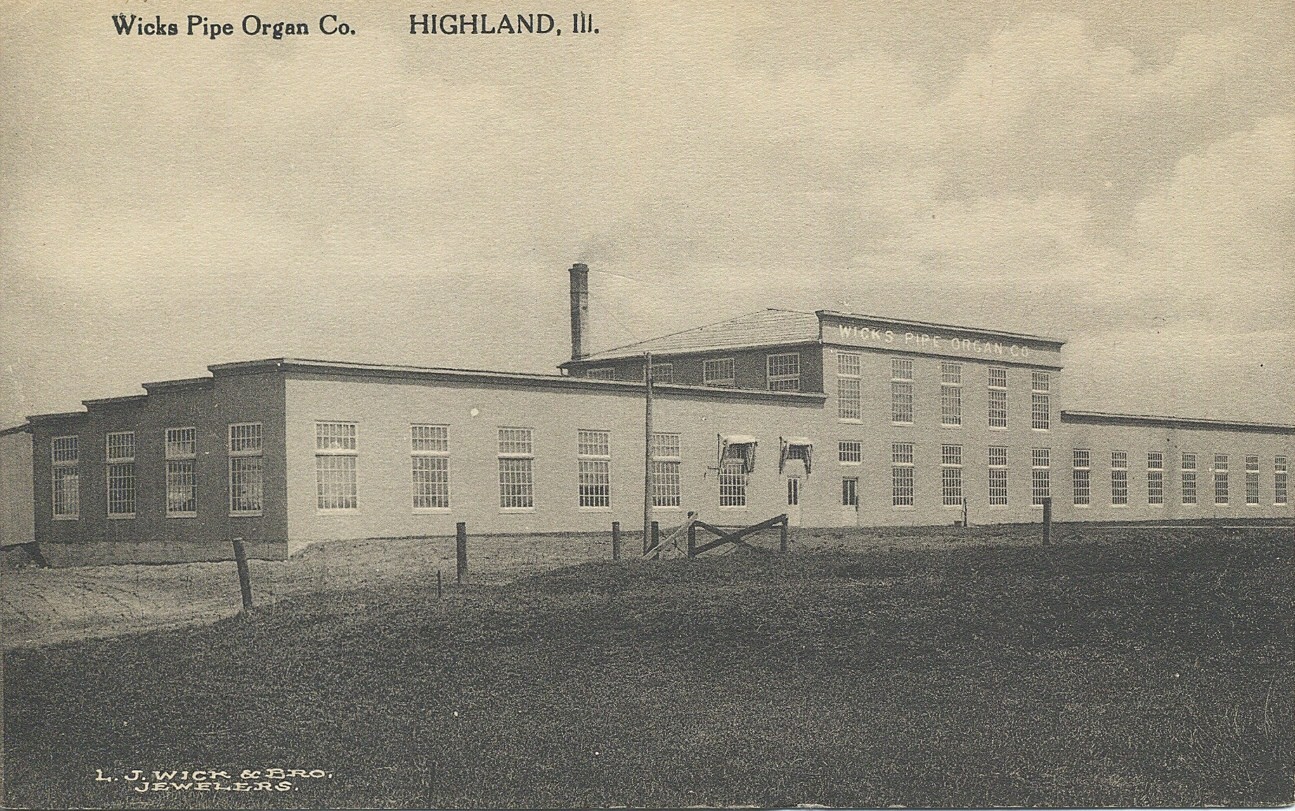 The Wicks Organ company built this factory in the first decade of the 1900s, and began operating there in 1910. The company moved to a new location in 2017.
From the Wicks Organ Company

The Wicks facility, built in the first decade of the 1900s, encompassed more than 140,000 square feet. The factory was comprised of multiple rooms, such as a mill room and wood storage area, pipe shops capable of storing 32-foot-long pipes, voicing studios, an erecting room for assembling and testing the instruments, a computer numerically controlled router—a recent addition—and more.8 Another Wicks family member and former president, Barbara Wick, described how “it’s all under one roof. Like a lot of little shops, you know, in the old days, we start with raw materials.”9 Wicks organs, according to their website, are made from Sitka spruce; the metal pipes, made at the Wicks facility itself, are cast tin and lead in a fifty-fifty or sixty-forty ratio, depending on the wishes of the customer.10 According to Mark Scholtz, an associate tonal director for the company, each pipe is created to make one sound, leading to the inclusion of up to several thousand pipes in a single instrument.11 Besides building organs for local churches, Wicks has undertaken several large builds as well as large-scale restoration projects. Two large Wicks organs are located at the First Baptist Church in Memphis, Tennessee, and Morehouse College in Atlanta, Georgia. Major restoration projects include the revamping of—including the installation of the “Direct-Electric” action patented by the Wicks family—the Aeolian-Skinner organ at the National Cathedral in Washington, D.C.12 Wicks Organ Company also refurbished and enlarged the Kilgen-Moller organ at the Cathedral Basilica of St. Louis.13 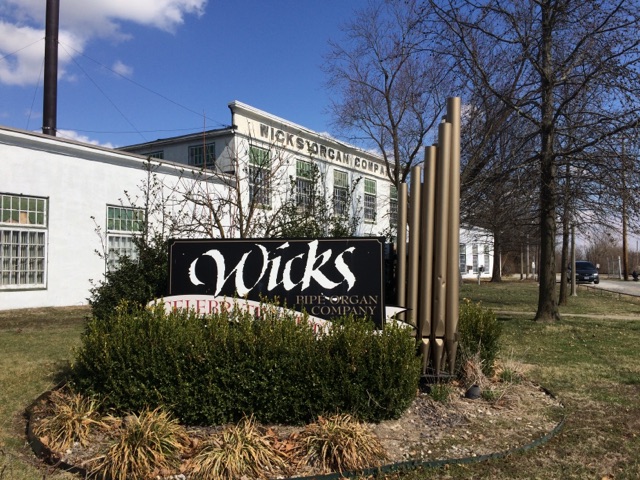 The second Wicks facility in February 2017, shortly before the company moved to a new location that year. The facility is now a gym space for Core Elite Tumble and Cheer.
From the Wicks Organ Company

In 2017, the Wicks Organ Company moved from their second 1910 location to one just across the street, at 416 Pine Street in Highland.14 The new location houses the Wicks Opus One, the first organ ever built by the Wick brothers in 1906—which, they say, still plays. Now, rather than focusing all of their resources on building new organs (though that is still an active aspect of the business), the Wicks Company is finding success in organ transportation. For instance, if a church in one area of the country shuts down, Wicks can travel there, take apart their organ, transport it to a new location, and reinstall the instrument for a new church.15 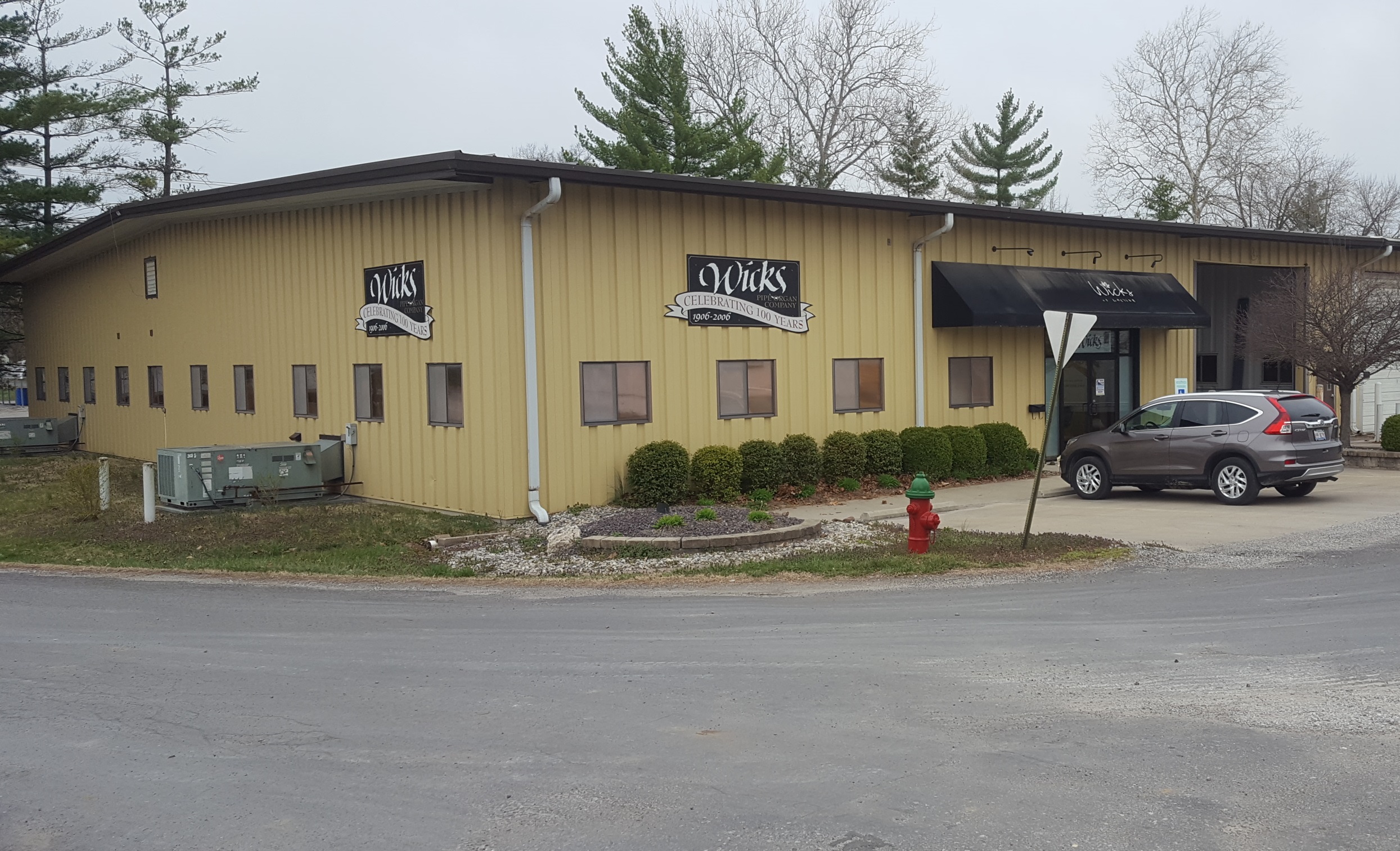 Currently, the second Wicks factory building is owned by Frank and Jennifer Ostrander, the latter of which is the president of Core Elite Tumble and Cheer, a competitive cheerleading group.16 As of 2019, Core Elite is making use of the space as a competitive cheerleading gym, and Ostrander has developed other areas of the facility into an event center with three large venue spaces. The Wicks family rents a room inside the building for use as a small museum to exhibit artifacts from the company’s century-plus history in Highland.17 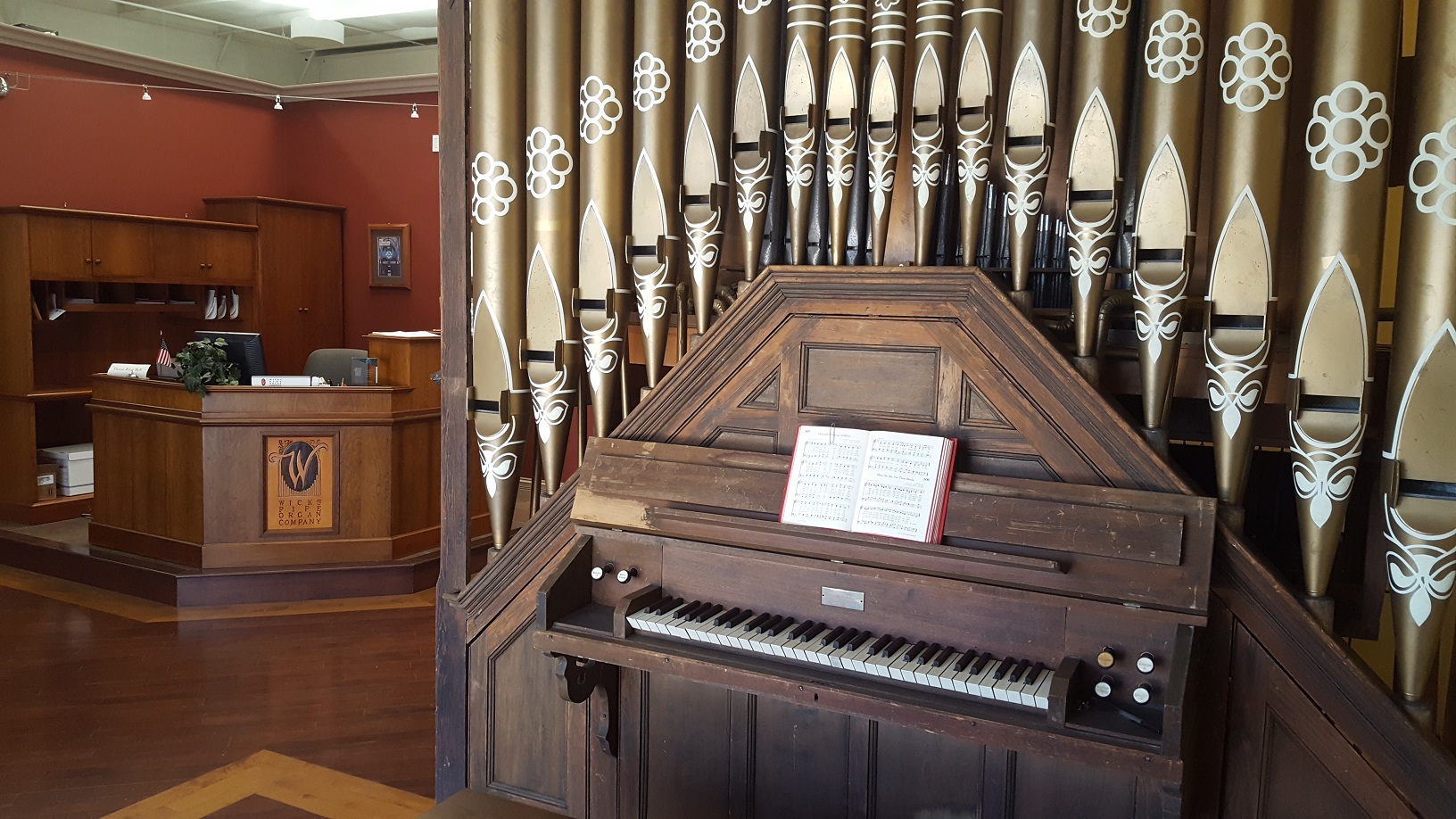 The first organ built by the Wicks brothers, the Wicks Opus 1, next to the reception desk at the company’s new location in 2017.
From the Wicks Organ Company

Cite this article: Abbie Schaefer, "Wicks Organ Company of Highland," Madison Historical: The Online Encyclopedia and Digital Archive for Madison County, Illinois, last modified June 28, 2019, https://madison-historical.siue.edu/encyclopedia/wicks-organ-company-of-highland/.
We are always committed to accuracy in our articles and archive items. If you notice a mistake or have a suggestion, please contact us.