Benjamin Godfrey (1794-1862) was a prominent citizen of the town that now bears his name, Godfrey, Illinois. Over the course of his life, Godfrey had several careers, including ship captain, merchant, investor, and philanthropist. Having lived in Chatham, Massachusetts; Baltimore, Maryland; and Matamoras, Mexico, Godfrey and his family settled in Godfrey in 1832, where he spent the rest of his life. In 1838, Godfrey invested the funds for the formation for the Monticello Women’s Seminary which operated until 1971. 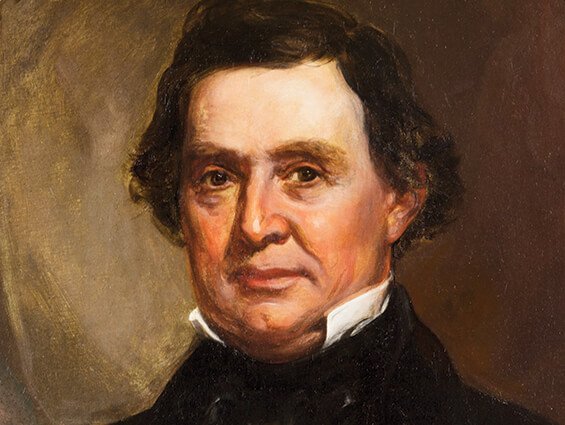 Born in 1794 to Knowles and Mary Ryder Godfrey in Chatham, Massachusetts, Benjamin Godfrey’s father, and possibly his mother, died before he reached the age of three.1 Remaining in Chatham, he was adopted by his uncle, Caleb Eldredge, a sea captain.2 At the age of nine, Godfrey began his career at sea which led him into naval service during the War of 1812. During his time in the navy, Godfrey navigated ships as a merchant marine throughout the Atlantic and after the war became captain of his own merchant ship.3

During his time as a captain, Godfrey sailed the Atlantic Ocean, amassing his first of many fortunes. He rarely spoke of this time in his life, but ship manifests during this era demonstrate ‘cargo’ as including enslaved people as well as consumable goods. By 1808, it was illegal for ships sailing under the American flag to partake in the trans-Atlantic slave trade. Transportation of enslaved people between states, however, was legal, and the interstate slave trade rapidly grew from the 1820s until the Civil War.4 In this way, Godfrey may have been involved in illegal contraband smuggling of enslaved people through the trans-Atlantic slave trade if he sailed under the American flag, or he may have transported them between ports within the United States. Either way, most sources concur that Godfrey was involved with the slave trade.5 On top of Godfrey’s possible involvement in the slave trade, some sources speculate he was also associated with the activities of the infamous pirate Jean Lafitte.6 Remarking on this period of his life, Godfrey stated, “all which he could ever accomplish would do nothing toward repairing the evil he had wrought by his previous life of sin.”7

Around 1820, Godfrey was part of a shipwreck that occurred near Brazos Santiago, Mexico, where he lost his first fortune and nearly his life.8 Stranded with no resources, Godfrey rose through the ranks of a mercantile house in Matamoras where, after nine years, he amassed another fortune only to lose it again when bandits robbed the wagon train transporting his fortune to the United States.9 Once back in the United States, he met Winthrop S. Gilman and opened a mercantile partnership called Godfrey, Gilman, and Company in New Orleans, and in 1832 the Company opened a storage and commission business in Alton, Illinois.10 In 1834, Godfrey and his family settled north of Alton in what is known today as Godfrey Township in Madison County.11 Sources are unclear as to when Godfrey met and married his wife, Harriet Cooper, but by the time he moved to Illinois he had six children, only three of whom survived.12

Once in Illinois, Godfrey bought the stone residence built by Calvin Riley and soon owned “approximately ten thousand acres of land, most of which lay in Godfrey Township.”13 By 1835, Godfrey, Gilman, and Company had gained control of the State Bank of Illinois, and Godfrey was one of the most influential citizens in the area.14 Godfrey had moved past his involvement with the slave trade and grew opposed to slavery, and he rented a warehouse to one of the era’s most well-known abolitionists, Elijah P. Lovejoy, for his printing press.15 It was at this warehouse where a mob killed Lovejoy for his printing of abolitionist literature. However, Godfrey’s interaction with Lovejoy was most likely transactional rather than ideological.16

Having amassed his third fortune, Godfrey embarked on his first of many philanthropist projects that benefitted his community. After joining a Presbyterian congregation 1832, Godfrey built a stone church at the corner of Third and Market in Alton, the town’s first religious building.”17 In 1845, he donated the building to St. Paul’s Episcopal congregation, which still occupies it today.18 Godfrey, however, made his largest donation in 1838 of 15 acres of land and $53,000 for the construction of buildings for the Monticello Women’s Seminary.19 Met with great fanfare as the “pioneers of Illinois were ambitious for their daughters to have the opportunities which their isolation from schools of the east and south seemed to deny them,” as stated at the college’s 75th anniversary.20 When asked what inspired him to build the school, Godfrey wrote that he was watching his children with their mother one day and “reflect[ed] on the powerful effect of a mother’s example on the minds, matters, and habits of their offspring.”21 Created to provide young women moral, intellectual, and domestic instruction, Monticello Women’s Seminary opened its doors on April 11, 1838, and continued operations for 133 years until 1971 when Lewis and Clark Community College bought the land.22 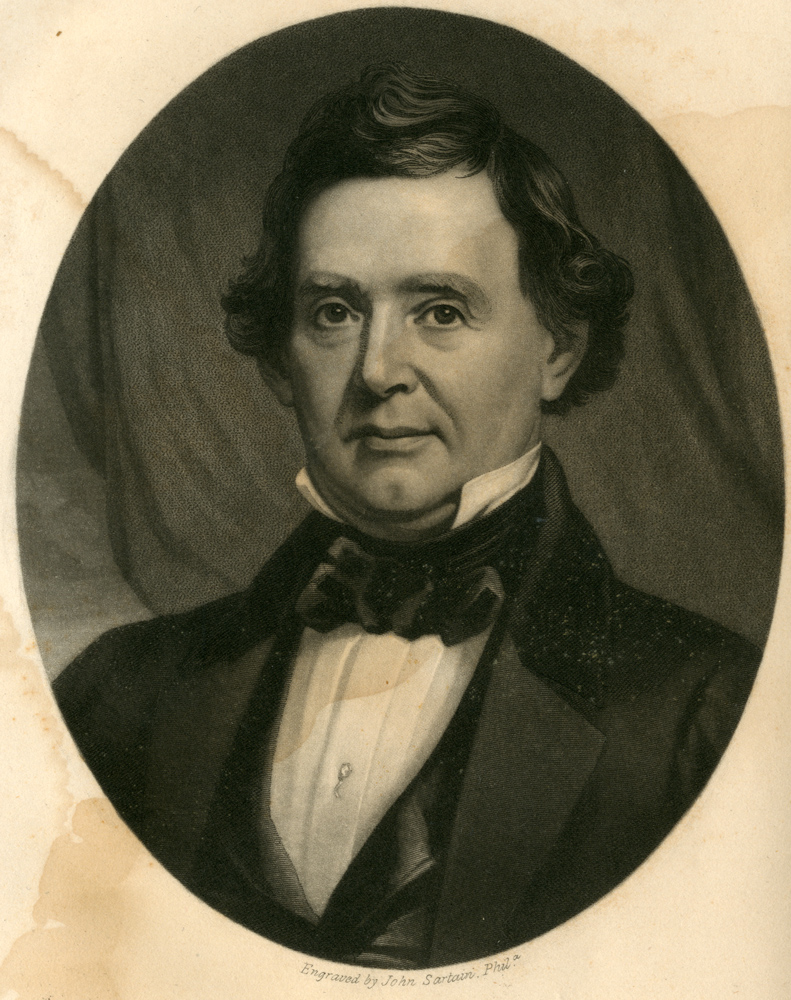 Engraving of Benjamin Godfrey by John Sartain of Philadelphia
From A. T. Norton, History of the Presbyterian Church in the State of Illinois. Vol I (St. Louis: W. S. Bryan, 1879), 701.

A few months after the opening of Monticello Women’s Seminary, Godfrey’s wife Harriet died. The following year he married Rebecca Eleanor Pettit, who was twenty-four years his junior. The couple had three children together, two of whom survived to adulthood.23

From 1840 until his death in 1862, Godfrey continued land speculation and at one point owned more than 10,000 acres of land in Madison County, the majority in Godfrey Township. He also made substantial investments in lead mines in Galena and helped establish Alton’s first bank.24 He also planted the first orchard in Madison County, and was one of the first to manufacture the stationary threshing machine.25 Benjamin Godfrey died of apoplexy on August 13, 1862 and was survived by eight children (of the fifteen from both of his marriages) and his wife, Rebecca.26

Benjamin Godfrey did not leave his namesake on the buildings he built and knew the town he lived in as Monticello. When Madison County opened a post office there, however, they could not call it Monticello because there was already a town by that name in central Illinois, near Decatur. Instead, they named it Godfrey Post Office in Monticello and eventually changed the name of the town to Godfrey.27

Cite this article: Brendon Floyd, "Godfrey, Benjamin (1794-1862)," Madison Historical: The Online Encyclopedia and Digital Archive for Madison County, Illinois, last modified June 28, 2019, https://madison-historical.siue.edu/encyclopedia/benjamin-godfrey/.
We are always committed to accuracy in our articles and archive items. If you notice a mistake or have a suggestion, please contact us.