By Elizabeth Silva and Ben Ostermeier

In 1891, a group of business men raised $5,000 to establish the Collinsville Caning and Packing Company, building a small plant in Collinsville. In 1907, brothers Everett and Elgin Brooks took over the company and plant, naming it the Triumph Catsup and Pickle Company. They soon renamed it the Brooks Tomato Products Company. The company and plant then changed hands twice, first by the American Cone and Pretzel Company in 1907, then the G. S. Suppiger Company in 1933. Both companies kept the Brooks brand name. However, the company encountered legal trouble over the name of their catsup, “Brooks Tabasco Flavored Catsup.” Another company, the McIlhenny Tabasco Company, threatened to sue the Brooks Catsup Company for copyright infringement. To avoid a legal battle, the Brooks Catsup Company changed the name to “Brooks Old Original Tangy Catsup.”3

The G. S. Suppiger Company expanded the Collinsville plant during the 1930s and 40s,4 producing not only catsup, but also chili beans, spaghetti, hominy, soups, and other sauces.5 During WWII, Nazi prisoners of war picked tomatoes for the plant.6 By 1947, it needed a water tower for plant production and to supply water to the new sprinkler system for fire protection.7 Previously, the plant drew from Collinsville’s water supply, lowering water pressure throughout Collinsville.8 Company President Gerhart S. Suppiger suggested building the water tower in the shape of their catsup bottles. W.E. Caldwell Company of Louisville, Kentucky was contracted to build the water tower in 1947. Their drawings were approved in 1948, and the bottle was completed in October 1949,9 costing the company $23,926.40. The new water tower returned Collinsville water pressure to normal levels, pleasing local residents.10 The water tower can hold 100,000 gallons of water or 640,000 bottles of catsup.11 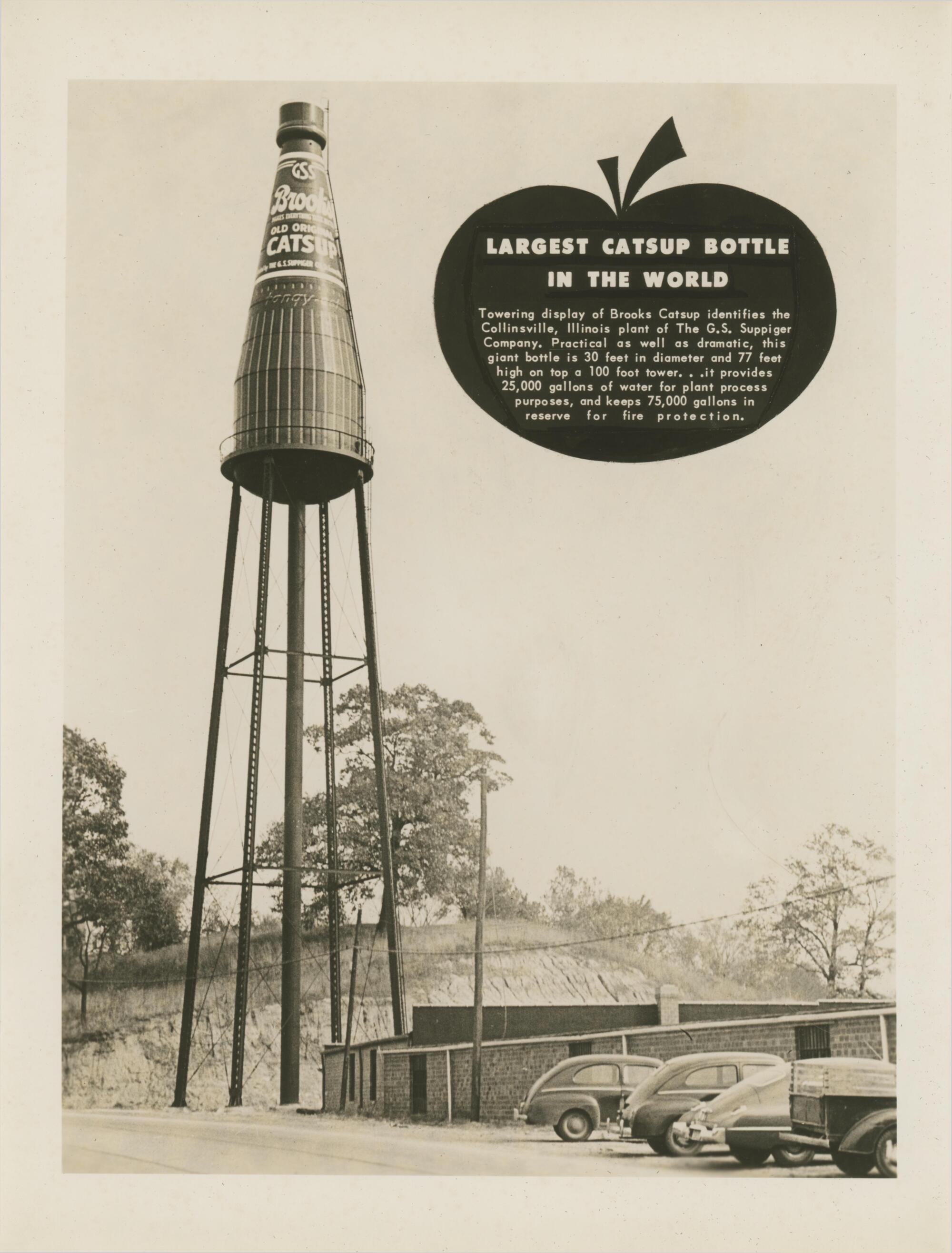 In 1959, Brooks Foods merged with P.J. Ritter Company, and the new owners moved catsup bottling to Mt. Summit, Indiana in the early 1960s. Brooks Foods turned the Collinsville plant into a warehouse and distribution center. Brooks Foods halted upkeep and maintenance of the Catsup Bottle, as it had become too expensive.12 In the early 1990s, the paint on the bottle was faded and peeling.13 By 1993, Curtice-Burns, Inc. had become the parent company of Brooks Foods and decided to sell the Collinsville warehouse. The company was willing to deed the Catsup Bottle to the city of Collinsville, but the city declined the gift. City officials said the cost to repair and repaint the bottle was too expensive for the city’s budget.14 Collinsville Mayor Fred Dalton said in an interview, “We, the city, have no practical use for the Catsup Bottle.”15 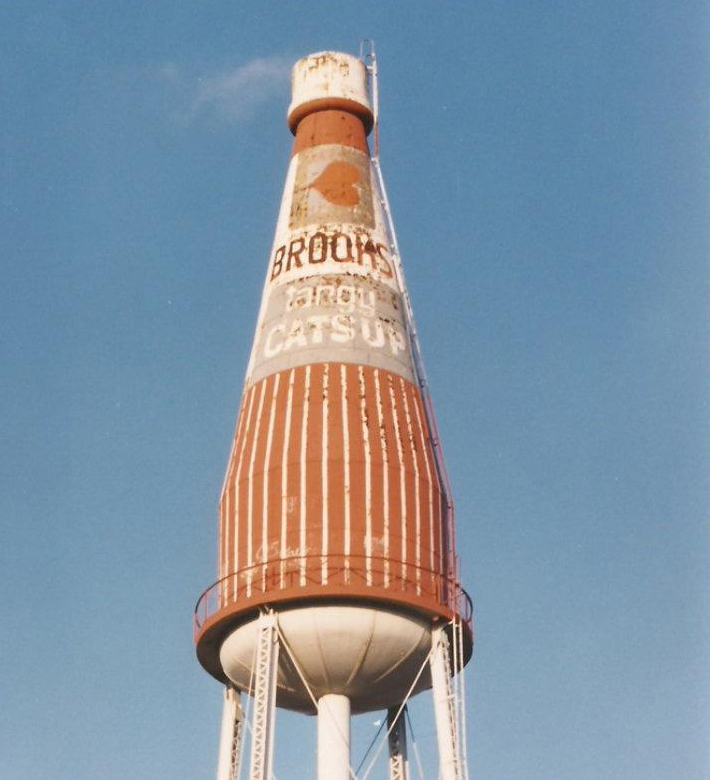 The paint on the Catsup Bottle was faded and peeling by the early 1990s, with some considering it an eyesore.
From the Official World’s Largest Catsup Bottle® Web Site and Fan Club

The Catsup Bottle Preservation Group sought to restore the bottle to its appearance in 1949. Ralph Finch, a collector of antique ketchup and catsup bottles, generously loaned two Brooks bottles from the 1940s to the restoration project. The group used his bottles as the template for the restoration. Diversified Coatings of O’Fallon, Illinois, a painting company that specializes in water towers, was contracted to restore the bottle.19 Starting in April 1995, workers from Diversified Coatings carefully sanded down the original lead-based paint, repaired the bottle, and then repainted it back to the original 1949 catsup bottle.  The painters had to paint the 70-foot bottle by hand because its shape did not allow for their regular equipment to be used. The workers had to be suspended by cables to paint the bottle.20 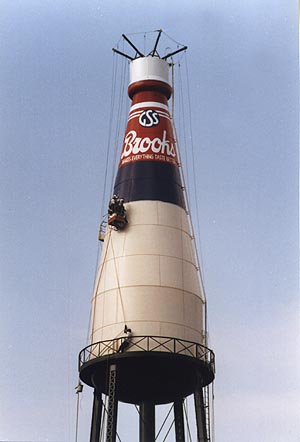 During the 1995 restoration, the painters of the Catsup Bottle had to be suspended by cables and paint by hand, due to the bottle’s shape.
From the Official World’s Largest Catsup Bottle® Web Site and Fan Club

In the 1990s and 2000s, Bethel-Eckert Enterprises used the warehouse next to the Catsup Bottle to store commissary supplies. However, due to tough competition, the company downsized and transitioned to a trucking firm, and in 2014, owner Larry Eckert put the Catsup Bottle and warehouse up for sale.21 The town of Collinsville wanted to keep the landmark intact, however, they did not have the funds to buy the bottle.22 Local building contractor Franklin “Al” Bieri, owner of Mississippi River Construction Co., bought the bottle and adjacent warehouse for $500,000 in 2015 with a promise that he would preserve the bottle.23

The Catsup Bottle has become a recognizable feature in the local culture of Collinsville and the Metro East. Every year since 1998, there has been a Words Largest Catsup Bottle Festival to celebrate the landmark.24 It has been the site of proposals and teen pranks.25 Local folklore holds that pregnant women who get too close to the Catsup Bottle will give birth to red heads.26 It has even received national attention. In 2002, The National Register of Historic Places recognized the Catsup Bottle as a National Landmark.27 In 2005, President George W. Bush mentioned the Catsup Bottle in a speech he gave in Collinsville,28 and it was even mentioned in the 2010 film The Twilight Saga: Eclipse.29 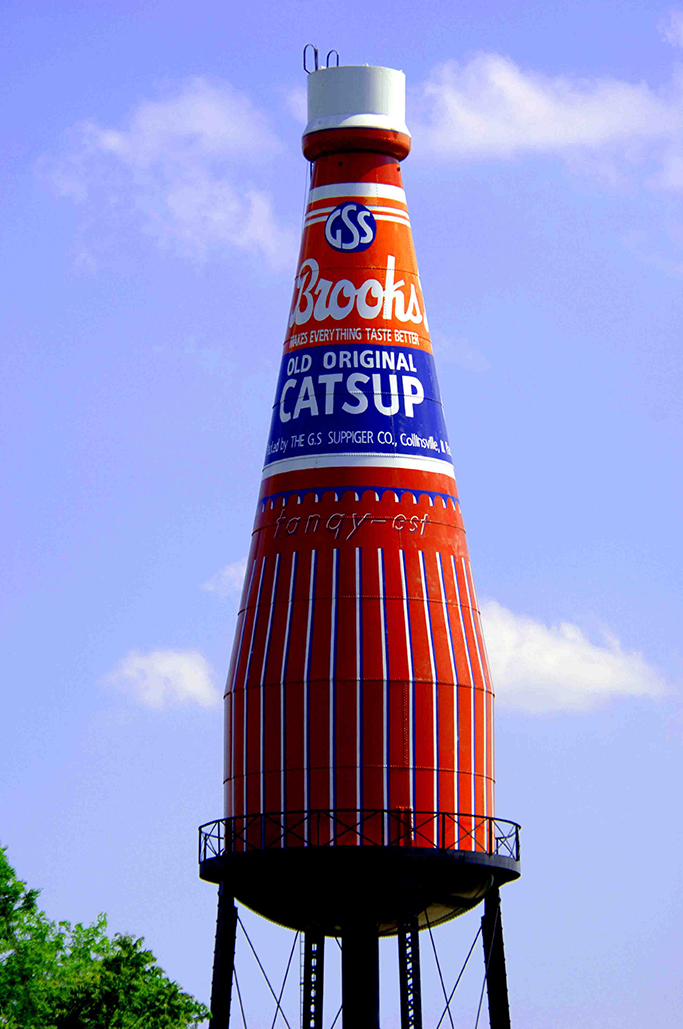 The Brooks Catsup Bottle is located at 800 S. Morrison Ave. in Collinsville along Highway-159.

Cite this article: Elizabeth Silva and Ben Ostermeier, "The World’s Largest Catsup Bottle in Collinsville," Madison Historical: The Online Encyclopedia and Digital Archive for Madison County, Illinois, last modified October 30, 2019, https://madison-historical.siue.edu/encyclopedia/catsup-bottle/.
We are always committed to accuracy in our articles and archive items. If you notice a mistake or have a suggestion, please contact us.