In May 1954, during the the Cold War, the United States Army Defense Command announced the construction of more than 300 Nike anti-aircraft installation sites in 28 states.1 The U.S. Department of Defense chose Marine as one of the four sites for a Nike Missile Base in the St. Louis area. The other two Illinois facilities were in Grafton and Hector, with a fourth location in Pacific, Missouri. All were coordinated out of Scott Air Force Base.

Built at a time when the nation lived in fear of a deadly nuclear war with the Soviet Union, Nike missiles were designed to provide the last line of defense for the nation’s population and industrial centers from enemy attack. Nike installations were designed to ring the cities and industrial centers – referred to as the “vital areas” (VA) – that they were to protect.2 In this case, the greater St. Louis industrial area, including vital oil refineries, needed to be protected from high-altitude bombing raids. Project Nike was a U.S. Army project to develop a line-of-sight, anti-aircraft missile system to protect against bombers flying at speeds of up to 500 miles-per-hour at altitudes of up to 60,000 feet.3

The site selections for Nike facilities involved several phases of planning, design, and evaluation and were built under the supervision of the Chicago District of the Army Corps of Engineers. With the selections made, the Marine site was known as NIKE SITE SL-10, which was equipped with Nike Hercules surface-to-air nuclear guided missiles. The Nike Hercules was an anti-aircraft missile with an atomic warhead. Additionally, the Hercules was capable of destroying targets traveling more than 1,500 miles per hour, at altitudes between 5,000 and 10,000 feet or 75 miles from launching site and with an accuracy approximately 435 times greater than World War II anti-aircraft artillery.4

Under the provisions of Paragraph 2a, General Order 60, dated May 25, 1959, Battery A, Marine, Illinois was organized.5 The property contained a total of 144.78 acres of land.6 With the site location established, a military team of men had to be trained to maintain and operate the highly complex electronic system. The initial plan was to man the facility with about 104 officers and enlisted men with a monthly payroll of $24,000.7 Troops began arriving at the base near Marine in August of 1959.

Although no missiles were ever launched, there was one occasion when the base was put on wartime alert. During the Cuban Missile Crisis in 1962, the missiles were moved to launch pads and made ready as soldiers took up defensive positions around the base.

On August 16, 1968, the Nike base was deactivated by the U.S. Department of Defense. In September of 1971, the Madison County Board held a meeting to propose a resolution to buy almost 20 acres of the abandoned Nike missile base in Marine Township at a cost of $40,250 to be used for storage and other purposes.8  In November of 1988, Marine village obtained the actual deed for another section of the Nike missile base with plans of a new sewer plant for Marine. After years of soil tests and some soil removal, Marine’s new sewer treatment plant was completed in 2001. 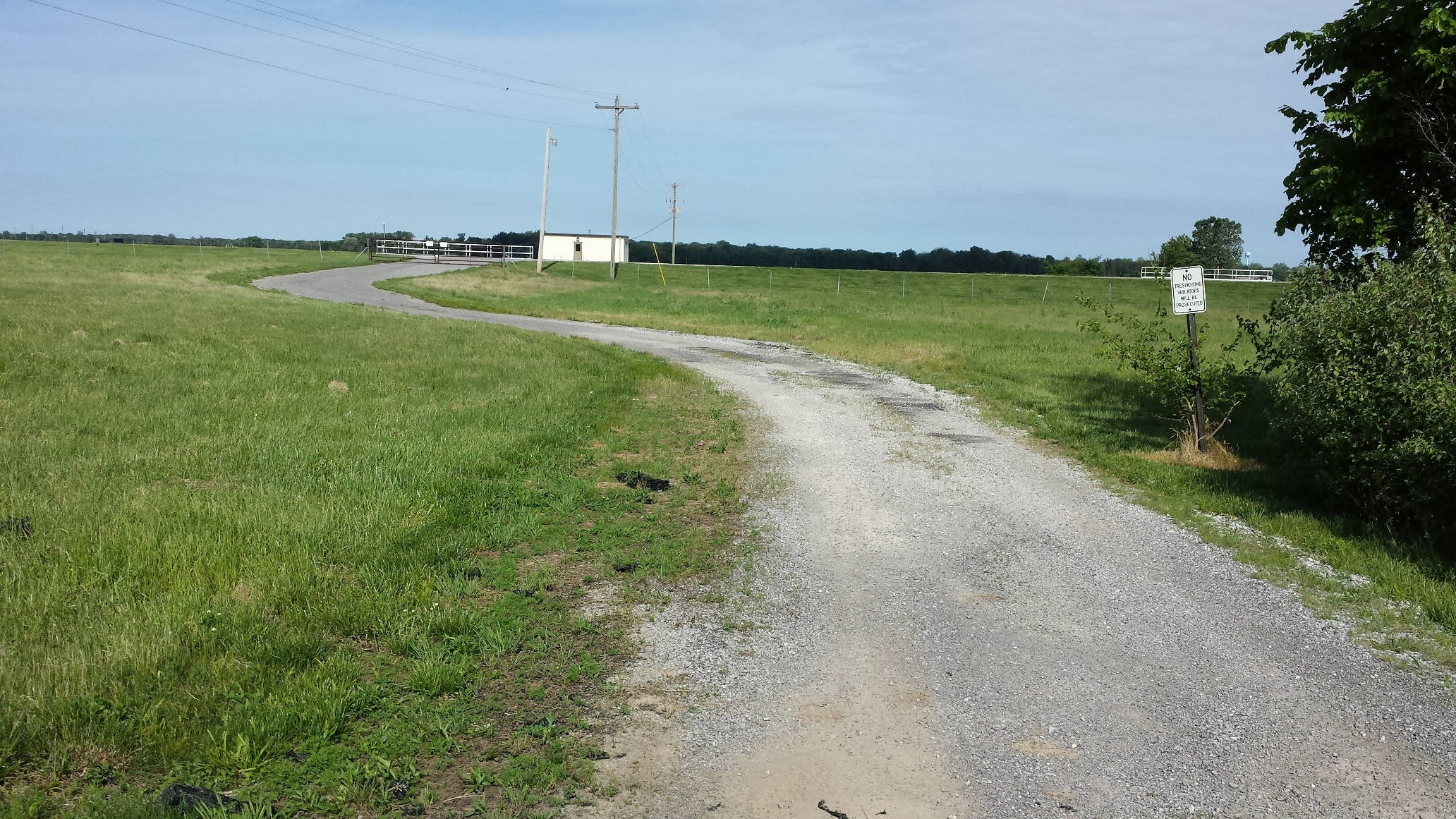 Photograph of the former site of the Nike base in 2015, having become a sewage treatment facility for the village of Marine in 2001
Photo by Ron Plante

Cite this article: Kelli Barbour, "Nike Site SL-10 in Marine," Madison Historical: The Online Encyclopedia and Digital Archive for Madison County, Illinois, last modified February 12, 2019, https://madison-historical.siue.edu/encyclopedia/nike-site-sl-10-in-marine/.
We are always committed to accuracy in our articles and archive items. If you notice a mistake or have a suggestion, please contact us.