Paul Simon was an Illinois Democratic senator from Madison County born November 19, 1928 to a devout Lutheran family in Eugene, Oregon.1 Despite never completing college, he became a successful businessman, senator, and advocate for human rights who fought against corruption at the local, state and national levels.

During the Great Depression of the 1930s, Simon’s father Martin worked as a pastor while his mother Ruth worked at a local cannery.2 While living in Oregon, his father built a publishing and editing company he operated out of their garage with equipment purchased with a loan.3 Simon attended Eugene High School where he came to the realization that he did not want to enter the religious vocation as previously planned and had several teachers who encouraged him to pursue journalism.4 After graduating, he worked part-time writing sports columns for the Eugene Register-Guard.5 He attended the University of Oregon starting at age 16, and after his family moved to Highland, Illinois, he transferred to Dana College in Blair, Nebraska.6

During his junior year at Dana College, Simon’s father wrote to him informing him of a business and job opportunity at a weekly paper, the Troy Call, located in Troy, Illinois. Simon left college and purchased the paper in 1948 for $3,600, almost entirely funded by the local Troy Security Bank run by James Watson.7 With the aid of his family, especially his mother and brother, Simon launched the newly named Troy Tribune as a four-page weekly on June 24, 1948.8

Paul Simon in the early 1950s, when he was the publisher of The Troy Tribune
From P.S. Illinois: The Paul Simon Collection, WSIU Public Broadcasting and PBS Learning Media, © 2012

The same year Simon re-launched the Tribune, he ran a series of editorial campaigns to encourage improvements to city infrastructure. His editorials were published under the headline “Trojan Thoughts,” and included local interest stories about developing a new citywide sewer system and the creation of a public library.9 Simon also ran editorials on corrupt law enforcement that profited from illegal gambling and prostitution.10 He went so far as to personally file a formal complaint against Madison County Sheriff Dallas Harrell and called for State’s Attorney Austin Lewis to be disbarred.11 In 1951, as a result of his corruption complaints to the Illinois Bar Association, Simon was asked to testify publicly at a televised hearing, which led to numerous calls for Simon to run for public office.12

Simon attempted to improve his community in other, more mundane ways as well through his publications and by engaging in a variety of what he called “social causes,” such as hiring rehabilitated convicted murderer, David Saunders, to work at the Tribune. Simon came to trust Saunders after working with him on parole reform legislation from inside the prison. Saunders eventually became editor of another one of Simon’s papers and won numerous national awards for his journalism.13 Simon eventually came to own 14 weekly newspapers, one of which was later operated exclusively by Saunders.14

In 1951 during the Korean War, Simon joined a military reserve unit based out of St. Louis. However, when the unit became unnecessary, Simon made the decision to enlist and was sent to Germany while a close friend continued to run the Troy Tribune.15 Simon completed two years of service as an intelligence officer, and once he returned home in 1953, began to consider entering politics. In 1955 he ran as a dark-horse candidate and won a seat in the Illinois House of Representatives, which he held until 1963 when he was elected to the State Senate. In 1968, Simon became Lieutenant Governor of Illinois, serving from 1969 to 1973.16 He taught at Sangamon State University in Springfield, Illinois, for a year starting in 1972 and worked with Harvard University’s John F. Kennedy School of Government in 1973.17 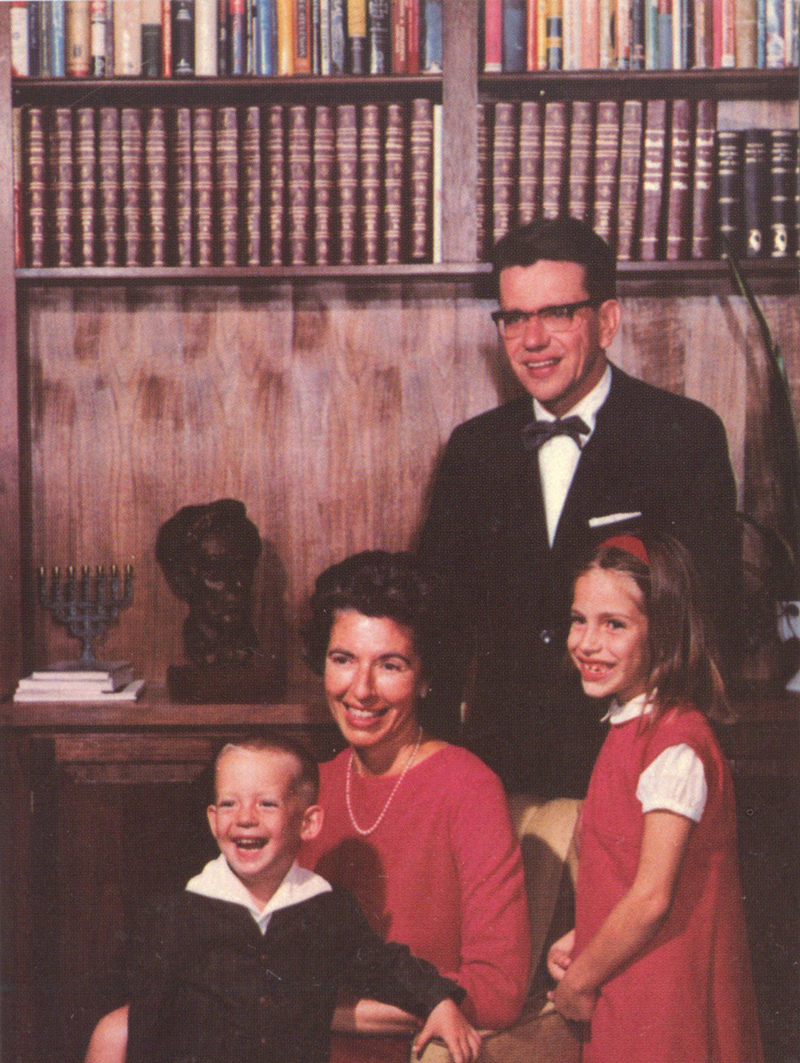 Paul Simon’s family Christmas card from 1967, which includes his wife Jeanne Hurley Simon and his two children Sheila Simon (who would become the Illinois Lieutenant Governor from 2011 to 2015) and Martin Simon.
From the Bloomington-Normal Local History Resources of Illinois Wesleyan University

In 1974, he was elected to the United States House of Representatives and served five terms representing Southern Illinois.18 In 1984 he ran for the United States Senate and defeated three-term Republican incumbent Charles H. Percy. Simon is also notable for his failed bid to gain the Democratic presidential nomination in 1988, which he lost to Michael Dukakis. Despite his loss in the Democratic primary, he served two terms as senator until 1996 when he decided not to run for re-election and instead moved to Makanda, Illinois to teach at Southern Illinois University Carbondale.19 While there, he founded and directed the Paul Simon Public Policy Institute until his death following heart surgery on December 9, 2003.20 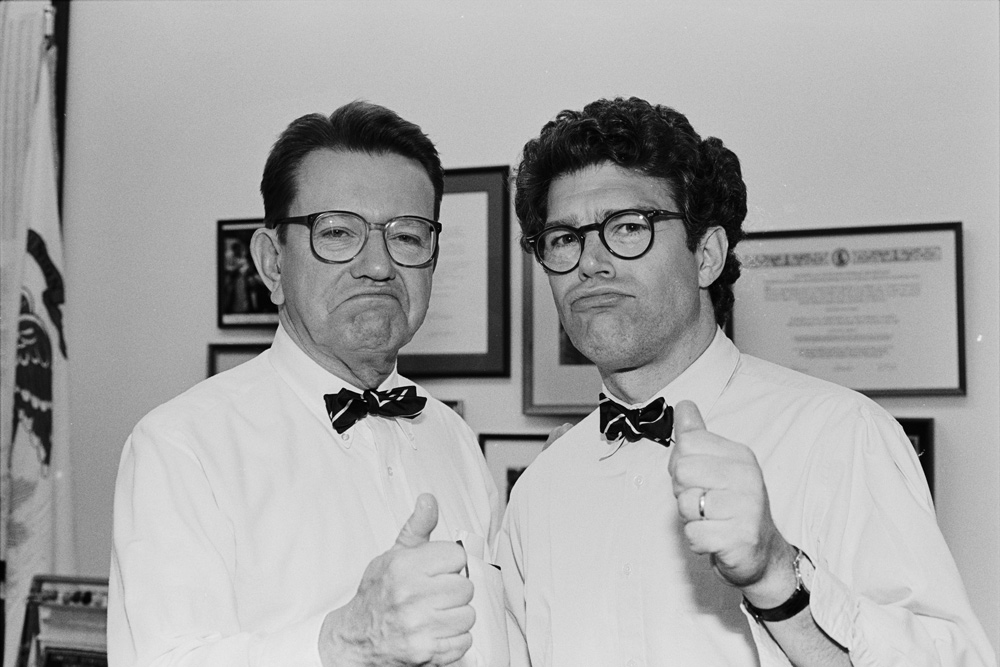 Paul Simon (left) with comedian Al Franken (right) in 1992, both wearing Simon’s signature bow tie. They are rehearsing for a Citizen Action dinner honoring Simon at the Mayflower Hotel in Washington D.C. Franken impersonated Simon on Saturday Night Live during the 1988 presidential election and would go on to serve as a U.S. Senator from Minnesota from 2009 to 2018.
From the Library of Congress.

An appreciation for the work and legacy of Paul Simon continues in the city of Troy and Madison County. In Troy, where Simon operated the Troy Tribune, a museum was created in 2005 which commemorated Simon’s influence on the city and state. In June of 2006, the Paul Simon Museum assisted in the passage of the Illinois General Assembly’s House Joint Resolution  0015 (HJR0015) which in recognition of Simon’s service to the state and his local community established the Paul Simon Freeway which consists of two miles of interstate 55, and a portion of Route 162, both of which run alongside Troy.21

Due to a lack of funding, the Paul Simon Museum in Troy was forced to close in June 2012.22 His institute at Southern Illinois University Carbondale continues to follow Simon’s legacy and promote political reform. Simon is largely remembered for his anti-corruption campaigns, support for education reform, affirmative action, environmental protections, calls for gun control, bipartisanship, renewable energy, journalism, and his signature bow tie.

Cite this article: Shannan Mason, "Simon, Paul (1928 – 2003)," Madison Historical: The Online Encyclopedia and Digital Archive for Madison County, Illinois, last modified June 28, 2019, https://madison-historical.siue.edu/encyclopedia/paul-simon/.
We are always committed to accuracy in our articles and archive items. If you notice a mistake or have a suggestion, please contact us.