The Madison County school districts began consolidation in the 1940s.  By 1947, there were 135 school districts in the county that served 27,838 students and employed 1,063 faculty.1 More than half of the 135 schools were one-room districts. In an effort to improve educational opportunities, the Illinois legislature passed a law which provided for the reorganization and, ultimately, consolidation for Illinois and Madison County shools. In House Bill 251, measures were put in place to allow Superintendents of Schools to notify their districts of the potential to consolidate and the process. In larger Illinois districts, such as Chicago, Chairman of the Education Committee and co-sponsor of the bill Lottie Holman O’Neill (1878 – 1967) spoke to more than 300 school board members about the decision to consolidate.2

For the citizens of Madison County, a seven-person School Survey Committee was appointed in 1945 in response to a directive by the state legislature to determine potential new geographic boundaries for the reorganization and consolidation of schools.4

In 1947, Governor Dwight Green (1887 – 1958) signed a law solidifying the criteria for community unit school districts. This was known as House Bill 575.5  After holding both public and private meetings, the Madison County School Survey Committee determined that the community unit district would be the most beneficial reorganization and consolidation for the students and staff of Madison County.

The Committee for Consolidation and Reorganization of Madison County recommended the creation of eleven community unit school districts in their 1947 report to the Illinois State Department of Education.7 The establishment of the community unit district, however, would ultimately be decided upon by a popular vote within the community.  As early as 1948, petitions were filed in Madison County with the County Superintendent, who would then organize a public hearing and vote for reorganization and renumeration.

Although community unit districts provided, in essence, a better quality education than a one-room school house or an elementary district, some residents of Madison County were still apprehensive about change in the educational system. The first attempt at generating a community unit school district was in Roxana, which was met with opposition by some of its residents who claimed that the community unit district was a “land-grabbing affair contrived and planned for the advantage of the North Roxana Village and Shell Oil Company.”8 However, the Roxana Community Unit District was still consolidated and renumerated in 1949 despite the accusations.9

Some attempts at reorganization failed, such as the East Alton–Wood River area vote for consolidation in 1973. The last school district to be organized and renumerated was Venice, which became Community Unit District #3 in 1957.10 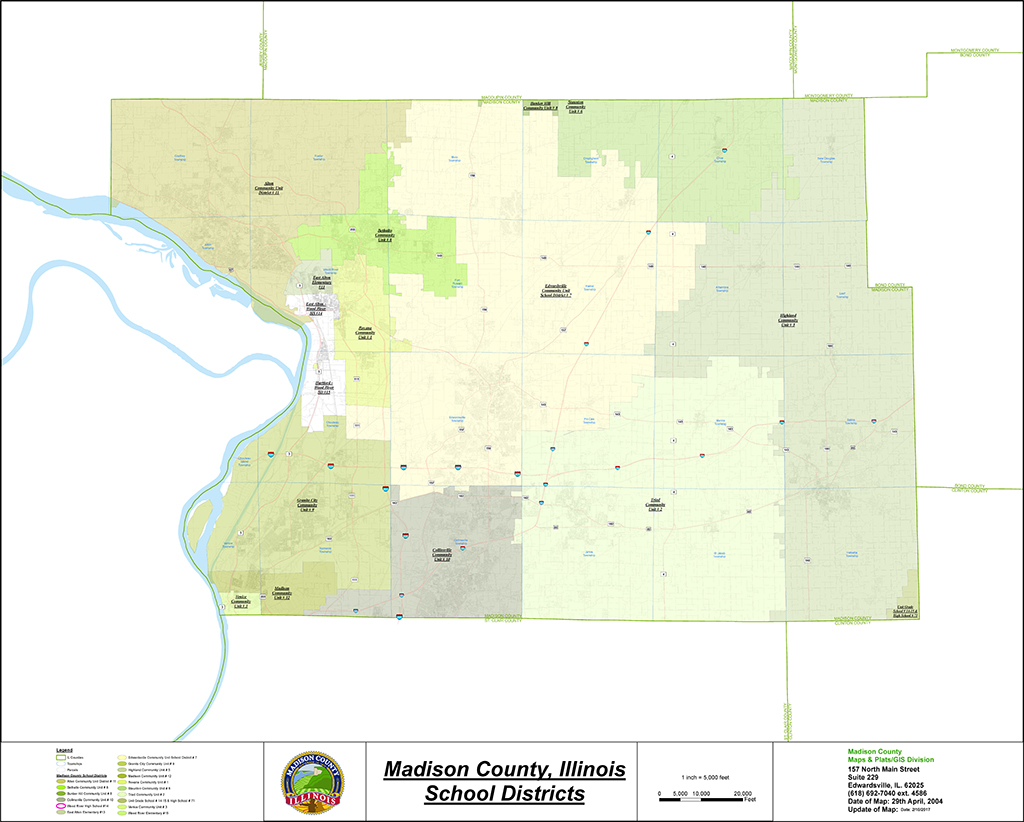 By 1956, the districts that comprise Madison County’s school system were created. In 1968, House Bill 1090 of the Illinois State Legislature created the Department of School District Consolidation to provide consultant services to help consolidated districts provide equal opportunity for quality education standards.11 Over time, these districts have grown in order to incorporate Madison County’s growing population.

13 school districts are primarily or entirely located in Madison County. They are:

Cite this article: Lesley Thomson, "School District Consolidation in Madison County," Madison Historical: The Online Encyclopedia and Digital Archive for Madison County, Illinois, last modified February 14, 2019, https://madison-historical.siue.edu/encyclopedia/school-district-consolidation-in-madison-county/.
We are always committed to accuracy in our articles and archive items. If you notice a mistake or have a suggestion, please contact us.