By Nichol Allen and Jessica Mills

The Center for Spirituality and Sustainability at SIUE is housed in this historic geodesic dome, designed by R. Buckminster Fuller (1895 – 1983) , a renowned twentieth-century architect, designer, and visionary. Built in 1970 and 1971, Fuller was commissioned to create a Religious Center that could serve SIUE’s population. The R. Buckminster Fuller geodesic dome represents the intricate relationship between SIUE, Fuller’s ideology, and architectural expression. 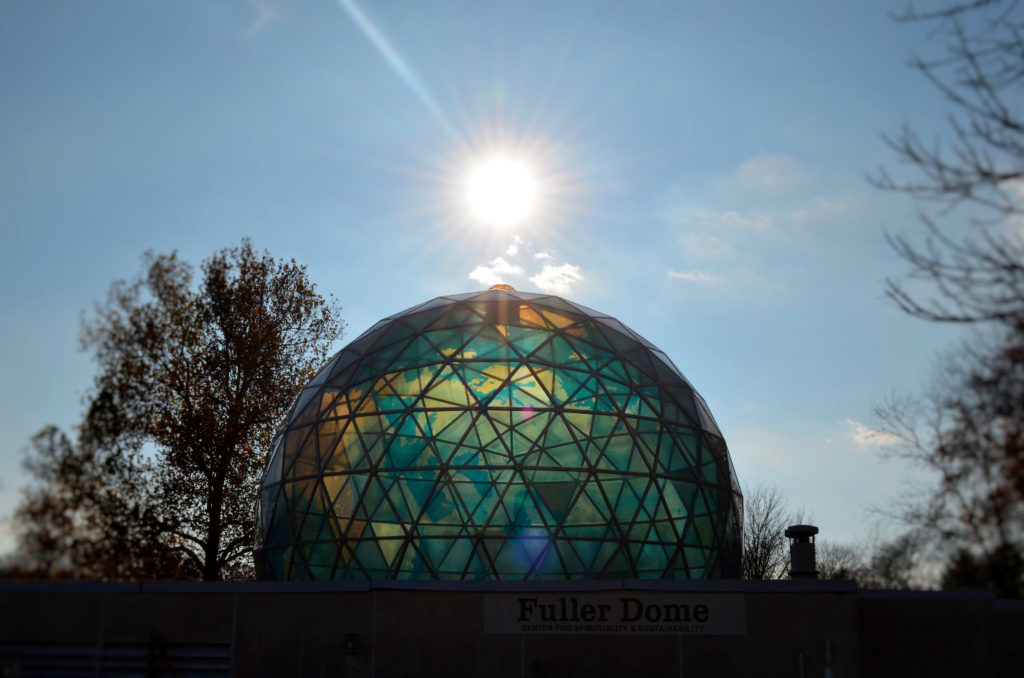 Due to population growth in the Metro-East area, Southern Illinois University Carbondale (SIUC) responded by opening several additional campus locations in Alton and East St. Louis. Enrollment numbers increased exponentially, pushing SIUC to build an additional campus in Edwardsville. Groundbreaking ceremonies for Southern Illinois University Edwardsville (SIUE) began in 1963, and by 1965 Peck Hall opened and hosted classes for students.1 The architect, Gyo Obata (1923 – present)2 designed the SIUE campus with a direct purpose and concept that SIUE would be, “…reminiscent of a small college square, with all facilities located within a circle,” all automobiles and traffic would be kept out of the area of learning, creating a space of tranquility. He conceived the main structures on campus to visually create a sense of uniformity by ensuring that, “… all roof lines are perceived as flat … exterior is highlighted by 4+ story brick towers, … brick towers are offset by horizontal bands of grey…” utilizing a specific color of brick called “Edwardsville red.”3

The Religious Council, made up of several local pastors, ministers, and preachers, came together because they desired to have a space on the campus for students to worship, due to the fact that the campus is secluded away from the town of Edwardsville. In addition to the main structures on campus, the Religious Council wanted to create a multi-functional building that could cater to the spiritual needs of students as well as create additional space to accommodate the future growth of the campus. This building would house up to six different denominations and have several large rooms that could be used for various different functions, with the entire building encompassing a total of 20,000 square feet. In response, SIUE commissioned Hellmuth, Obata, and Kassebaum (HOK) to design a building that mimicked the other buildings on campus.

The Religious Council never raised the necessary funding for construction. After almost a decade of fundraising (1960-1968) they only had half of the $500,000 needed to build the HOK designed structure. In 1968, the Religious Council eliminated the original HOK design plan and sought out another architect that would build them a religious center costing the $250,000 they had raised. President Delyte Morris (1948-1970) turned to a fellow staff member of the Department of Design at SIUC, R. Buckminster Fuller, for a design concept for SIUE’s religious center. Fuller and design partner Shoji Sadao designed a geodesic dome structure that would be more environmentally and economically effective.4 Fuller and Shoji’s geodesic dome design would be 7,400 gross square feet with an estimated cost of $255,000.5

SIUE and the Religious Council chose R. Buckminster Fuller’s cost effective dome design and started discussing construction in 1969. The building was completed in 1971. In October 1971 a week long dedication ceremony took place within the structure. During this week there were dance performances and lectures by local pastors, reverends, and ministers, as well as Fuller himself. The campus newspaper, The Alestle, documented the festivities.

The spherical structure of a dome is one of the most efficient interior atmospheres in structural design. The dome design allows for energy and air to flow and circulate in a non-obstructed motion that allows for the space to be more cost efficient. After Fuller received the bid for building the Dome, he gained permission from President Morris to move the location to the 90th Meridian.6

This aligned with Fuller’s ideology about the 90th Meridian being the world’s highway connecting everyone. The Dome is a geodesic representation of the Earth positioned in the universe. When inside the Dome, looking up, Edwardsville becomes the geographic center of the Earth due to its placement on the 90th meridian.7 In 2008 the Dome changed its name from The Religious Center to The Center for Spirituality and Sustainability. The center’s mission statement, created by Benjamin Lowder states, “The dome’s translucent miniature Earth is a beacon for global unity by providing a place for connecting the world’s cultural and spiritual traditions through their common concern for the planet.”8

Cite this article: Nichol Allen and Jessica Mills, "SIUE Fuller Dome," Madison Historical: The Online Encyclopedia and Digital Archive for Madison County, Illinois, last modified February 14, 2019, https://madison-historical.siue.edu/encyclopedia/siue-fuller-dome/.
We are always committed to accuracy in our articles and archive items. If you notice a mistake or have a suggestion, please contact us.