St. Paul Lutheran Church of Hamel, Illinois, known as “The Church of the Neon Cross,” is located at 6969 W Frontage Rd along Old Route 66 just north of Hamel. The present building was dedicated in 1931. The church, established by German settlers in the mid-1800s, has thrived as a place of worship and iconic destination for travelers along Old Route 66 and Interstate 55 into the 21st century despite its location in a rural community. 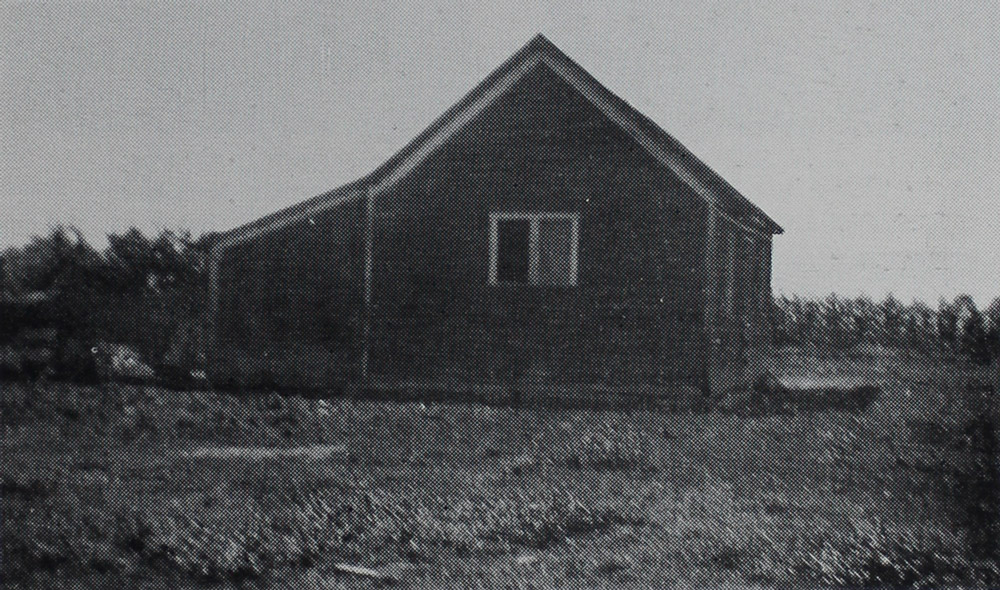 The first church services for the St. Paul congregation were held in the home of Heinrich Brase starting in 1854. In 1856 the congregation built the first parsonage. From 100 Years of Grace: St. Paul Lutheran Church (Staunton, IL: Star-Times Publishing Co, 1956), 7.

The congregation was established in 1856 by a group of German Lutherans who had settled in what was then known as New Gehlenbeck.1 The nine charter members of the congregation were Henrich Brase, Christian Brase, Wilhelm Bettmann, Ludwig Lueker, Karl Mueller, Henry Piper, Friedrich Proett, Ludwig Schlechte, and Henrich Steinmann.2 The first parsonage, serving as the church, school, and home for the pastor, was completed on July 23, 1856.3 After only five years, that building was not large enough to house the whole congregation. A new church was built in 1861 for a cost of about $3,400.4 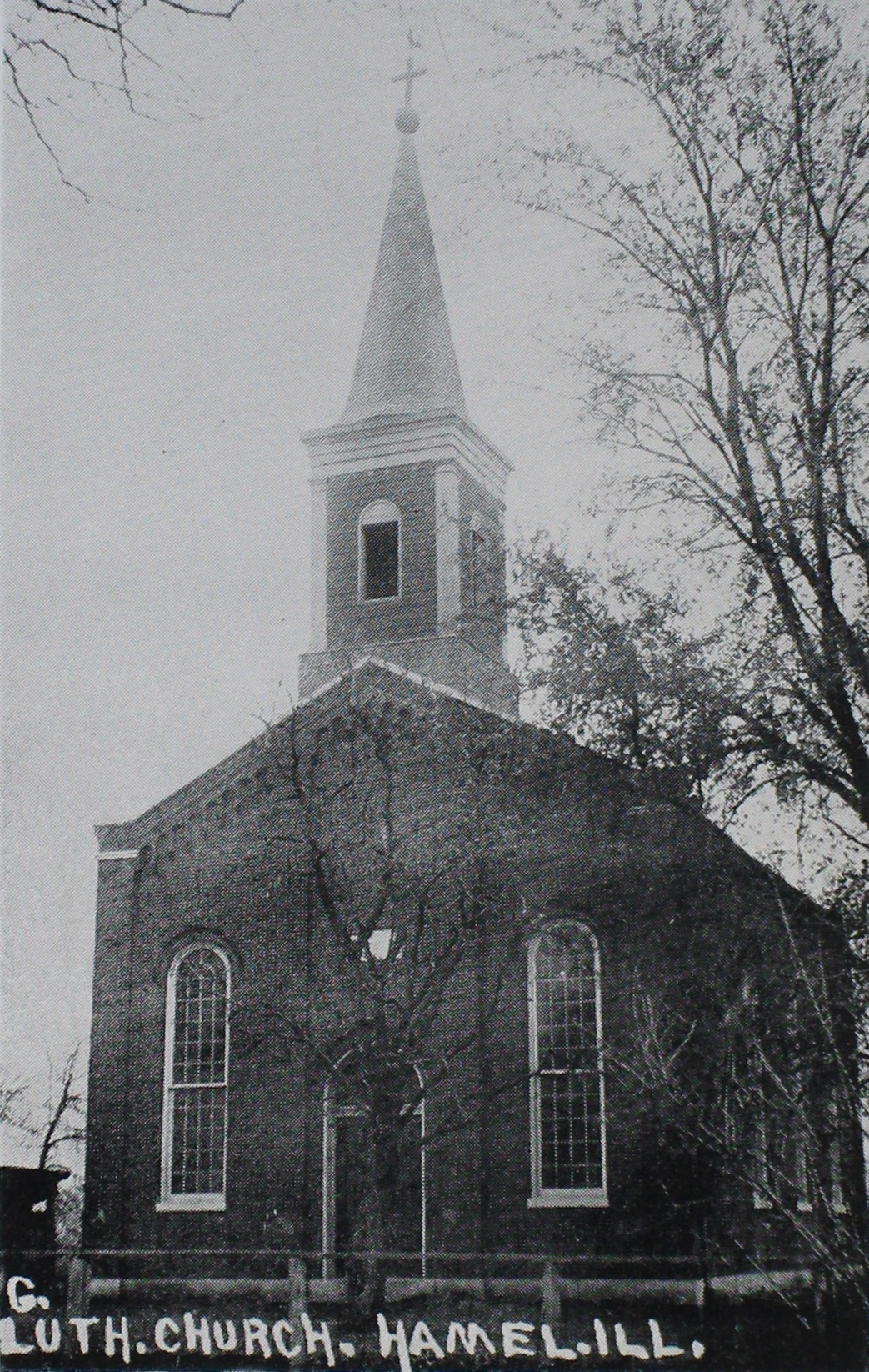 The first church building of St Paul Lutheran Church, built in 1861. Services were held at this church until the new church was built in 1931, at which time this building was torn down. From 100 Years of Grace, 15.

During World War I, 26 members of the congregation served in the armed forces.5 Two members, August Hellmann and Alfred Mueller, lost their lives during the war. The women of the congregation honored all who served with a flag that has 24 navy blue stars and two gold stars representing those veterans.6 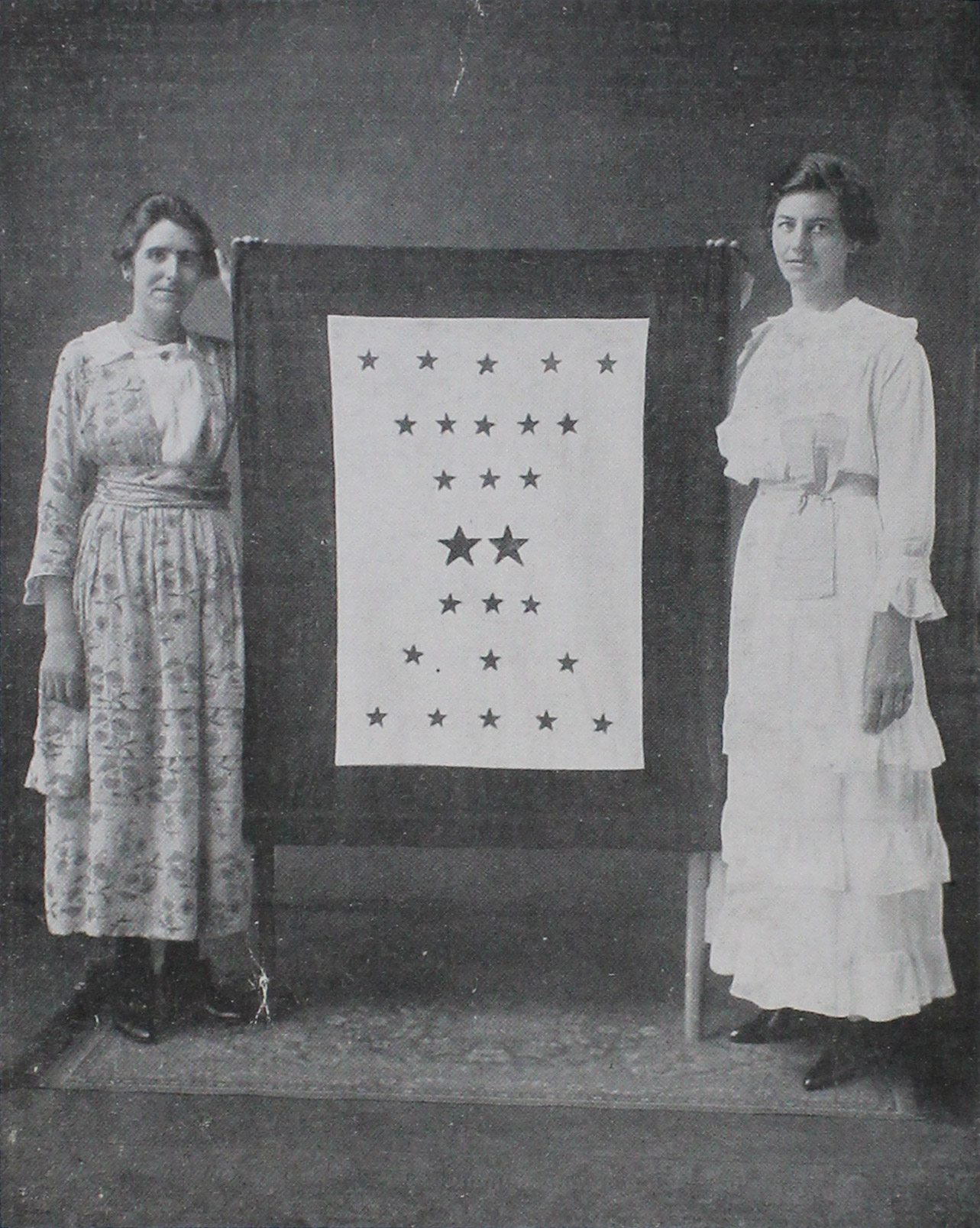 Women of the St. Paul congregation created this 26-star flag to honor the 26 members of the congregation who served in World War I. Two of the stars are gold, representing the two congregation members who died in the war: August Hellmann and Alfred Mueller. From
Souvenir-Album of Our Boys In the Great World’s War, 1914-1918: St. Paul Lutheran Church
(New Gehlenbeck, Illinois: self-published, ca. 1918), 52.

Church members decided build a new church in 1930, and on the 75th anniversary of the congregation in October 1931, the present church building was completed. The new church had a full basement, including a kitchen on the west end and a stage on the other.7 The construction cost of the church was about $46,000 including interest on bonds.8 By October of 1942, the entire debt was paid off.9

During World War II, 26 members of the congregation served in the armed forces and two members, Oscar Brunnworth and Edwin Schlechte, lost their lives.10 The Brunnworth family donated a blue neon cross to the church in memory of their son who was lost in combat at the Battle of Anzio.11 The neon cross is still one of the most prominent features of the church today. It has been an iconic feature to travelers on Route 66 and later Interstate 55 ever since. 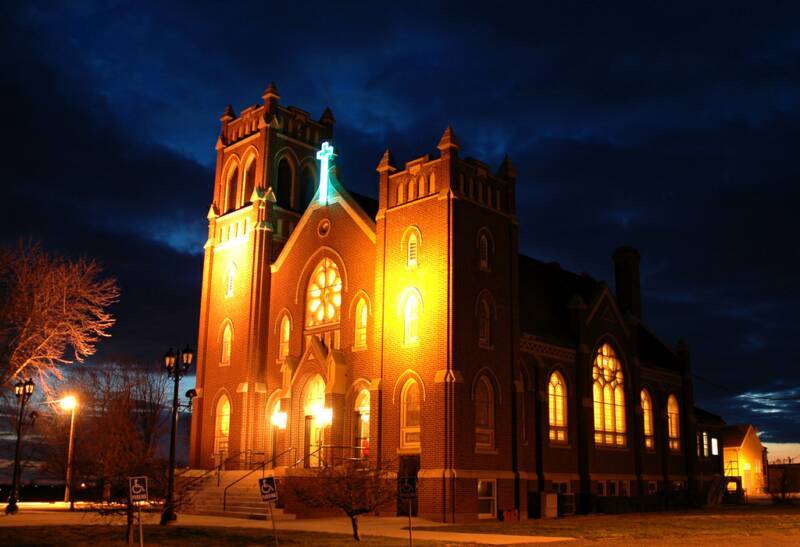 Because the congregation was established by German settlers, all of its services were held in German from its inception. It was not until October 1930 when the church began offering occasional communion services in English, and the school sponsored by the church started religious instruction in English in 1932.12 English was not adopted as the language for all the congregation’s services until 1944.13

As the congregation approached its 100th anniversary in 1956, the church was renovated and redecorated. A wall was constructed behind the altar which covered the stained-glass windows of the chancel, or the area around the altar. Additionally, a new organ, chimes, carpet, and furniture were purchased.14 During the summer of 1977, the church was again redecorated at a cost of $23,000.15 The church organ from 1956 was repaired and a new trumpet rack of sixty-one pipes was added for a cost of $22,000.16 In May of 1987, an outside elevator was installed at the north end of the church.17 Renovations to the church continued throughout the ten years leading up to the congregation’s 150th anniversary. In 1995, the stage area of the basement was removed and remodeled into a meeting room where Barbara Brase painted a wall mural representing the four seasons.18 In 1998, the front pews were removed and Carl Steinmann constructed the present communion rails.19 The church balcony was expanded to provide room for additional seating and musicians in 1999.20 A new audio and video system was added in January 2001 to record church services and special occasions.21 In May 2002, new lighting was added around the outside of the church to display its architecture and improve security.22 A new, metal roof was installed on the church in May of 2004 at a cost of $32,500.23

In November 2013, a fire broke out in the boiler room during an annual community event at the church. Following the fire, church services were held in the school gymnasium until reconstruction in the basement was finished. Services were then held in the church basement until they resumed in the sanctuary in September 2014 following the restorations. After the fire, the church spent about $500,000 to restore the chancel area to the original 1931 design and to upgrade the building’s plumbing, electrical, and heating and air-conditioning systems.24 The renovations to the building were done by Max Autenrieb Church Interior Decorating of Edwardsville, R.W. Boeker Company of Hamel, Ernst Heating & Cooling of Hamel, Camp Electric & Heating of Alton, Accurate Underground of Worden, and Vallow Floor Coverings of Edwardsville.25

St. Paul Lutheran Church has had its place in national and international events over its 160 year existence. Through these years, the church has striven to continually maintain and update its facilities. This continued work by the congregation has left a legacy to countless travelers on the nearby highway and interstate over the last seventy years. Those travelers will remember St. Paul Lutheran Church as “The Church of the Neon Cross.”

Cite this article: Chase Langendorf, "St. Paul Lutheran Church in Hamel," Madison Historical: The Online Encyclopedia and Digital Archive for Madison County, Illinois, last modified June 28, 2019, https://madison-historical.siue.edu/encyclopedia/st-paul-lutheran-church-in-hamel/.
We are always committed to accuracy in our articles and archive items. If you notice a mistake or have a suggestion, please contact us.