The Mill Fires of Bethalto

The President Merchant Mill was once one of the largest flour mills in the United States. Located in Bethalto, the mill was the commercial centerpiece of the village until it burned down in 1882 and again in 1895.1

First built in 1859 by James Neimrick, the President Merchant Mill was torn down in 1877 and rebuilt, increasing its daily output from 100 barrels of flour per day to 500 barrels.3 The mill, the grain elevator, and the supporting buildings and equipment were spread over an acre-and-a-half along the Indianapolis and St. Louis Railroad, in an area now occupied by a restaurant, insurance agency, and the village post office.2

In 1881 the mill was sold to John W. Kauffman who further improved the mill, increasing its capacity by an additional 100 barrels the following year. However these improvements were completed only months before the mill burned the first time.4 At approximately 11 p.m., a large explosion could be heard from inside the mill, and the structure was soon engulfed in flames. At the time, the source of the explosion was unknown, though it is now believed to have been caused by air filled with flour dust ignited by the heat of the mill’s machinery.5 Due to strong winds that night, the fire spread to a nearby grain elevator and a few other buildings on the property and would have likely spread to and destroyed the surrounding houses had it not been for the work of the townspeople.6 The loss was estimated to be between $125,000 and $140,000.7 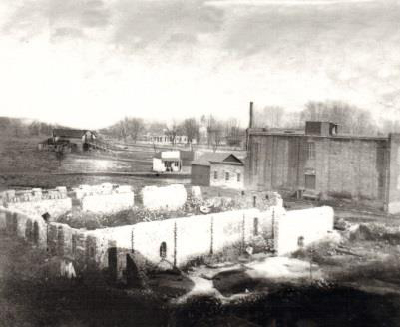 The remnants of the President Merchant Mill after the 1881 fire.
Photo from the Bethalto Residents Guide

Undeterred, Kauffman constructed a new mill, this time out of brick and outfitted with a sprinkler system. This left many with the impression that the new mill would be fireproof.8 It suffered the same fate as the previous mill on March 2, 1895. This time two dust explosions, occurring within a few seconds of each other, spread fire across the mill instantaneously. Despite the attempts to prevent another devastating fire, the mill was once again destroyed, as the mill’s sprinkler system was overwhelmed by the speed of the blaze and was itself damaged by “falling machinery and timber.”9 The loss this time was estimated to be around $200,000. The sentiment among the citizenry was mixed concerning the rumors of rebuilding, with the Alton Evening Telegraph reporting favorably while The Edwardsville Intelligencer was more ambiguous.10 This was the end for the mill. Despite plans to rebuild, the Kauffman Milling Company eventually abandoned the plan and built a new mill in Kansas.

By the time the President Merchant Mill was destroyed for the final time, its output had reached 360,000 barrels a year, though some acknowledge that the mill and the industry itself was waning.11 The daily average around the time of the explosion was as high as 900 barrels a day, which would have been even higher had the smaller mill machine been operating. Instead, it was being remodeled. Due to the remodel and the mill starting to ship in sacks instead of barrels, only twenty men were employed full time rather than the eighty that would have otherwise been required.

Bethalto’s role in the grain industry was never as substantial in the 20th century as it had been in the late 1800s. The village’s last grain elevator would close in 1936, and the final vestige of Bethalto’s mill industry burned to the ground in 1986 when the last building from mill era was destroyed in a fire. By that point, the building had been a hardware store for decades.12 In the meantime, the railroads that had made Bethalto such a prime location for the milling industry had also vanished, leaving behind a quaint and completely deindustrialized village.

Cite this article: Phil Schneider, "The Mill Fires of Bethalto," Madison Historical: The Online Encyclopedia and Digital Archive for Madison County, Illinois, last modified February 12, 2019, https://madison-historical.siue.edu/encyclopedia/the-mill-fires-of-bethalto/.
We are always committed to accuracy in our articles and archive items. If you notice a mistake or have a suggestion, please contact us.