William Bolin Whiteside (1777–1833) and his family were among the first Anglo-Americans to settle Illinois. He played a critical role in transforming an Indian and French landscape to the 21st state to join the union, fighting Indians in many wars including the War of 1812. Today he is buried on the campus of SIUE.

Whiteside was born in the backwoods of North Carolina in the third year of the American Revolution, December 27, 1777.1 In 1780, his father and uncles were among the 900 backwoods patriots who defeated British Loyalists in the Battle of King’s Mountain, the first decisive American victory in the southern colonies.2 In 1793 the large Whiteside family migrated to the nascent American territory in Illinois when William Bolin was 15.3

Settling in southwestern Illinois, they found less than a thousand Anglo-Americans scattered in various forts, towns, and farms in the American Bottom across the Mississippi River from the Spanish-owned, French trading post of St. Louis. The French population was nearly twice as large in the American Bottom, and the remnants of the once-mighty Illinois Confederacy of American Indian tribes also lived near the French towns.4 Other Indian groups, such as the Kickapoo and Potawatomi, recognized the serious threat American settlers like the Whitesides posed to their way of life. They raided Anglo-American settlements, killed unsuspecting settlers, and stole horses.5

The Whitesides began the process of “taming the wilderness” as soon as they arrived. William Bolin’s father, also named William Whiteside, reclaimed an abandoned fort originally built by the Flannery family. They had abandoned the fort after James Flannery was shot and scalped by attacking Indians in 1783. Exactly a decade later, the Whitesides brought new life to the fort and it came to be known as Whiteside Station, located in what is now Monroe County.6 It was one of a number of stations or forts built in the American Bottom for defense against Indian attacks.

Whites also conducted raiding parties of their own. In 1793 William Bolin’s father, uncle, and cousin pursued and attacked a group of Kickapoo that had stolen horses. They killed at least one of the Kickapoo. A year later, the father of the slain Kickapoo killed William Bolin’s 14-year-old brother Thomas as he was playing outside Whiteside Station.7 In 1795, William Bolin likely fought against Indians for the first time in the Battle of Canteen Creek, though it is probably best described as a slaughter. Fourteen Americans, including many Whitesides, attacked an Osage camp near modern-day Caseyville, and, if later accounts are accurate, killed every man, woman, and child. Their bodies were left to lay where they died; leaving their skeletons behind for many years as a warning to Indians.8

That same year, 1795, William Bolin and his brother Uel became acquainted with the daughters of Elizabeth Raines, an Anglo widow living in the largely French settlement of Cahokia. William Bolin and Sarah were married shortly thereafter, as were Uel and Ann.9 Their first daughter was born in 1799.10

Family tree of William B. and Sarah Whiteside
Graphic by Ben Ostermeier

William Bolin Whiteside became a prominent citizen of Goshen. Though his primary occupation was farmer, Whiteside was made a military captain in 1802. It is highly likely that either William Bolin or Uel met William Clark while he and the Corps of Discovery were wintering at Camp Dubois in the winter of 1803 and 1804. In his journal, Clark mentions William B.’s father and one of his sons visited the camp on January 2, 1804. According to Clark, the elder Whiteside said a number of young men in his neighborhood were interested in joining Lewis and Clark on their expedition.13

As a military officer, William B. Whiteside served a key role in the War of 1812 in Illinois. To protect Illinois settlements against a rising tide of Indian attacks, in 1811 Congress authorized the creation of four companies of mounted Rangers. Because of his military experience, William B. Whiteside was appointed captain of one of these companies.14 As captain, Whiteside was responsible for the protection of southwestern Illinois from Indian attacks. His company traversed the landscape between settlements in search of Indian bands poised to attack. These patrols were meant to deter Indian attacks as well as threaten area Indian settlements. Whiteside though was required to supply his own horses and equipment, but was paid $1 a day.15 One of the men who served under Whiteside was future Illinois governor John Reynolds.16

In addition to his participation in the dispossession and massacre of American Indians, Whiteside was part of America’s other original sin: slavery. Though slavery was officially banned in the Illinois territory by the Northwest Ordinance, many migrants from the south, like the Whitesides, ignored the rarely enforced ordinance and brought their slaves with them. Usually, they held their slaves as “indentured servants” as a legal loophole, and William B. Whiteside was no exception. He is known to have owned at least two enslaved women, Caty Smith and Tamor, who were likely responsible for farm work or house service.17

After the War of 1812, Whiteside became the second sheriff of Madison County in 1818, the first under the Illinois state constitution. He won with 260 votes, the incumbent sheriff Isom Gillham received 169 votes, and Joseph Borough 106.18 Whiteside served as sheriff until 1822.19 He was likely voted out of office because he and his deputy were charged with robbing the home of Richard Dixon, though Whiteside was acquitted. Despite what appears to be a fairly conclusive case against Whiteside for stealing $1200 from Dixon, Whiteside was friends with one of the jurors, Charles Kitchens, and while the remaining 11 jurors wanted to convict, Kitchens’ voice for acquittal led to a hung jury. The case was delayed, and during that time Richard Dixon died. Without a key witness, Whiteside was cleared of the robbery.

His deputy, Robert Sinclear, was less lucky, as the jury managed to find him guilty. He shortly thereafter though escaped to Arkansas, where he went on to serve in the Arkansas legislature.20

Whiteside fought in one final Indian war in 1831: the Black Hawk War. In the brief campaign of 1831, he captained a company of about 50 men recruited in Edwardsville. The company was only in service for 19 days and likely did not see any action. Whiteside was listed as sick the day the company was disbanded, which is possibly why he was not listed in service in the bloodier 1832 campaign.21 However, his cousin Samuel Whiteside commanded a brigade in that campaign. Under Samuel’s command was a 23-year-old New Salem merchant named Abraham Lincoln.22

William and Sarah Whiteside died a few months apart in 1833, possibly in the cholera epidemic following the Black Hawk War that also killed former governor Ninian Edwards.23 They were both buried on a hill overlooking their land. Two years later their first-born daughter Sarah died and was also buried on the hill, and in 1867 another daughter, Elizabeth, died and was also buried there. Likely that year, 1867, a new grave marker was erected: a white obelisk.24 Whiteside’s land changed hands and was divided many times in the century that followed, until it was purchased in the 1960s to become part of the campus of SIUE. 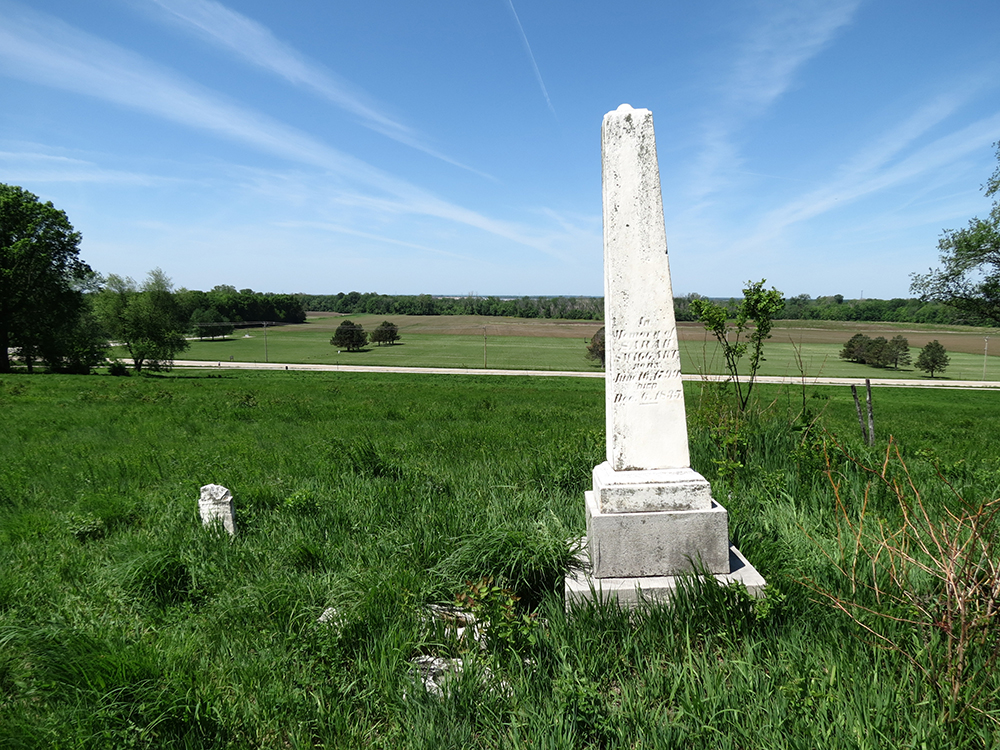 The white obelisk grave of William B. Whiteside, Sarah Whiteside, and two of their daughters on the campus of SIUE in 2015.
Photo by Ben Ostermeier

Note: Ben Ostermeier wrote his senior thesis at SIUE about William B. Whiteside, located at whiteside.siue.edu. For a more in-depth biography of Whiteside, see the Biography page at that website.

Cite this article: Ben Ostermeier, "Whiteside, William Bolin (1777 – 1833)," Madison Historical: The Online Encyclopedia and Digital Archive for Madison County, Illinois, last modified October 30, 2019, https://madison-historical.siue.edu/encyclopedia/william-bolin-whiteside/.
We are always committed to accuracy in our articles and archive items. If you notice a mistake or have a suggestion, please contact us.