The village of Bethalto, Illinois was first platted in 1854, though American settlers had been living in the area since the early nineteenth century.1 Located on the Indianapolis and St. Louis Railroad, the small community boasted a booming industrial economy for the time, with coal mines, a brick yard, a saw mill, and two large flour mills.3 It should not be surprising, then, that the community began the process of incorporating as a town in 1869, just fifteen years after its initial platting.2 The final incorporation as a village under the general law was accomplished on April 23, 1873.4 A little more than a week prior to this important moment in Bethalto’s progress, but certainly part of that progress, a notice appeared in the Alton Telegraph: “Our village authorities are making arrangements to put up a two story building, the lower to be used for a calaboose [jail], clerk’s office, &c., and the upper for a hall. It is to be built of brick.”5 With that small pronouncement, Bethalto embarked upon the building of not only a community but one of the first of its two village halls. 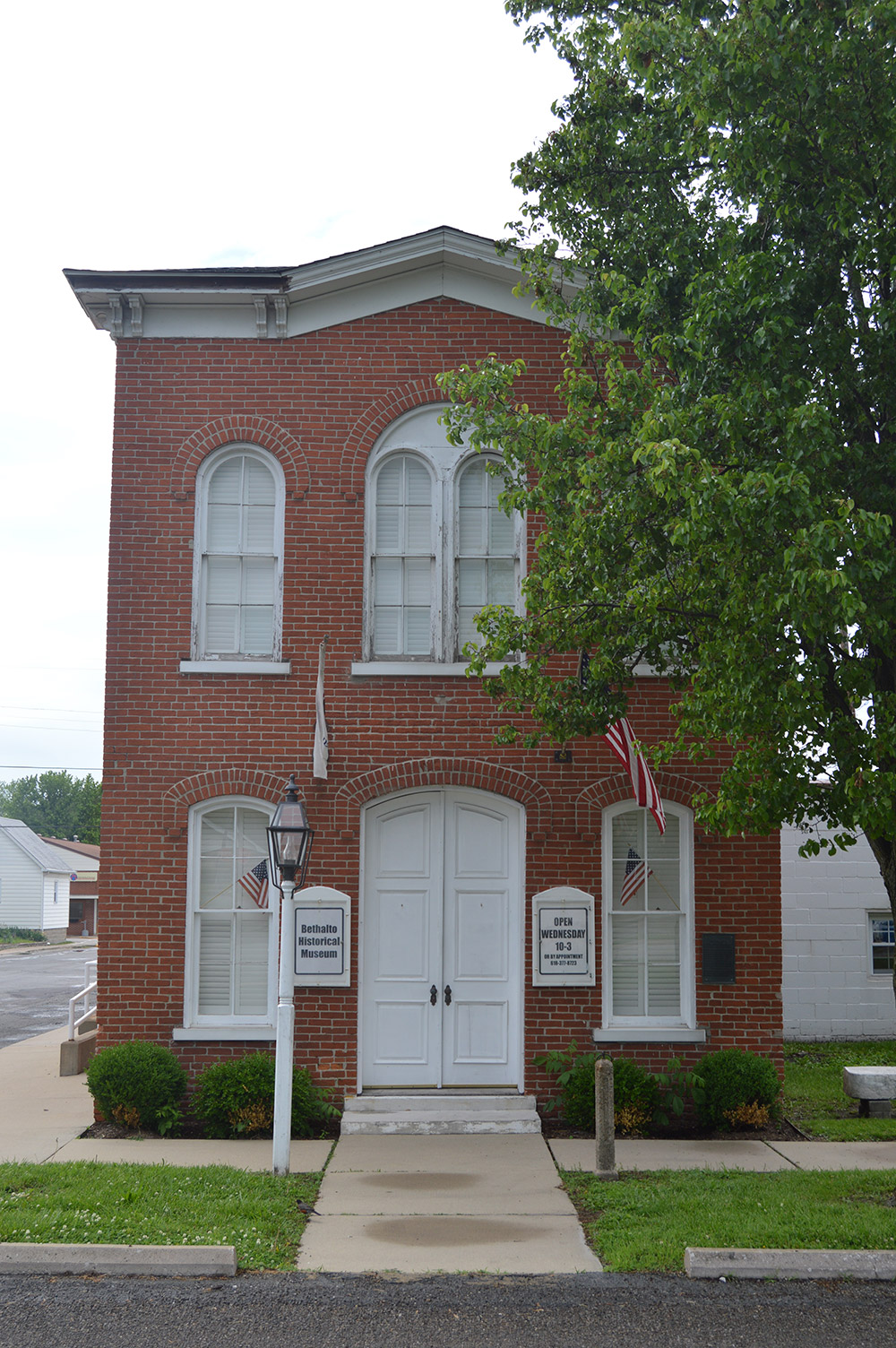 The original Bethalto Village Hall in 2014, which is now home to the Bethalto History Museum
From Wikimedia commons

Completed in 1873, the Village Hall was constructed from “soft red brick” with white-framed arched windows and door in the Italianate style “popular in the United States between 1850 and 1875.”6 The Italianate style is evident in the rounded windows, the broad eave at the front of the building with its decorated supports, its roofline, and high ceilings.7 Located on “lots 23 and 24 in the Joel U. Starkey Addition,” at the corner of First (now Main) and North Oak Streets, the village hall, the symbol of Bethalto’s civic progress, was built to face the railroad, the key to Bethalto’s early economic progress.8 In 1885, an addition was built onto the rear of the original structure made from the same material and matched the original structure’s architectural style.9 The interior floor plan was and still is spartan. A large room, presumably an office space, took up half of the original structure’s first floor, with space in the middle section of the building for a closet, restroom, and a single jail cell. Whether or not either the closet or the restroom had also been a jail cell when the village hall was first built is unclear. The upstairs is comprised of a large meeting room, which takes up the entirety of the original structures second floor, and a kitchen.10

The Village Hall was not only a sign of Bethalto’s progress, but it became a centerpiece of the town’s social cohesion. The second-floor meeting room was soon put into regular use by various groups. Several fraternal groups, including the Masonic Lodge, the Order of the Eastern Star, the United Ancient Order of Druids, and the Order of the Odd Fellows, among others, made use of the meeting room. The Bethalto School District also used the space for class space when needed, and, eventually, the town library was located there as well.11 In fact, there is some evidence that some of the men’s fraternal groups were the impetus behind the 1885 addition.12

The Village Hall stood stalwart as the seat of Bethalto’s government for nearly a century . Then, in 1962, an item was once again placed in the newspaper. time it was a notice for a special bond election being held for purpose of raising the $100,000 needed to complete the new municipal building.13 The proposal to replace the antiquated village hall made sense. Despite improvements and additions, including a storage room and a double-bay fire station, Bethalto had changed radically in the intervening decades.14 The flour mills, once the prize industry of the town, were gone—one having closed after suffering two major explosions—along with the complimentary cooperage (barrel-making) industry. The coal mines as well had closed by the mid-1940s. These two industries gone, it is no great surprise that the railroad would eventually leave Bethalto in 1966.15

The town had changed in other ways as well. Some of the fraternal lodges which had previously used the village hall as a meeting space had ceased to exist.16 Furthermore, the school would no longer need space for high school classes, as Civic Memorial High School (the present-day Trimpe Middle School) had been built in 1951.17 The new municipal building, however, would still offer a space for community use and would also house other municipal services such as the public library, which had been housed in the old village hall since the 1950s, along with the fire and police departments.18

Thus, on December 8, 1963 the new Bethalto Municipal Building was dedicated. Just a few blocks away from its predecessor, this new village hall ushered in a modern era for the century-old village.19 The original village hall is still standing, though much of the town it once served is gone. Even the Municipal Building that replaced it has changed, benefitting from an extensive addition in 1998.20 Today, the original hall houses the Bethalto History Museum. The building itself is a piece of history as it was placed on the National Register of Historic Places in 1987.21

Cite this article: Phil Schneider, "Bethalto’s Original Village Hall," Madison Historical: The Online Encyclopedia and Digital Archive for Madison County, Illinois, last modified February 22, 2019, https://madison-historical.siue.edu/encyclopedia/bethaltos-original-village-hall/.
We are always committed to accuracy in our articles and archive items. If you notice a mistake or have a suggestion, please contact us.