Slavery and Servitude in the Stephenson House

The Stephenson House is located at 409 S. Buchanan Street in Edwardsville. It is a classic Federal-style brick home. It was built through the labors of area craftsmen and the indentured servants owned by Col. Benjamin and Lucy Stephenson. While Illinois was ostensibly closed to slavery, Benjamin Stephenson had indentured servants who were African American and would be considered enslaved by modern standards.

In 1803, legislative law in Illinois “established a system by which slavery existed under the guise of voluntary servitude.” 1 Additional laws in 1805 restricted the “length of term of servitude” ultimately strengthening the foothold of slaveholders in the territory by establishing Black Codes. 2 The legislation of 1807 cleared the way for slaveholders to enter the newly established Illinois Territory in 1809. Among those settlers were Ben and Lucy Stephenson’s family. When the Stephensons arrived in Kaskaskia from Kentucky in 1809, they brought with them three slaves: Tobe (age 23), Winn (age 18) and Hark (age 15 years and 6 months). 3

When Ben and Lucy’s servant Tobe was registered in Randolph County, his indenture listed him as a 23-year-old “mulatto” male with the following notation: “THIS NEGRO WAS TO BE FREED BY A FORMER EMANCIPATION AT 28 YEARS OF AGE. TOBE WAS 23 YEARS AND 9 MONTHS OLD AT TIME OF ENTRY. HE WAS TO SERVE 4 YEARS AND 3 MONTHS.” 4 We know Lucy inherited Tobe and Winn from her father’s estate but have not been able to discover where the third servant, Hark, was obtained. All three are documented in November 1809 as servants indentured to the Stephenson family. Unfortunately, nothing more than term of indenture (45 years for Hark, 30 for Winn) and sex is included in Winn’s and Hark’s official terms of indenture.

Documents in the Illinois state archive show that, over the many years that the Stephensons lived in Illinois, they bought and sold at least 11 indentured servants. 5 Eleven indenture records associated with Ben have been found, as well as two different bills of sale for servants sold by Lucy. 6

Documentation of the servants begins with Winn, Hark, and Tobe, the three slaves they originally brought to Kaskaskia in 1809. The following year, five indentured servants were listed as part of Ben’s household in Randolph County’s 1810 federal census.7 Indenture registrations for June 12, 1810, show the addition of two further servants that year: Deborah (age 3) and Hannah (age 25). Both are listed as female, “negro,” and “Removed from Kentucky.” Deborah was bound to serve 29 years of indenture, while Hannah would serve 30. 8 It is obvious that Deborah was born into indentured servitude, as her term of service is in accordance with territorial legislation of 1807.

References to the servants do not appear again until 1817, when the family moved from Kaskaskia to Edwardsville, and new county indentures were filed with the courts. Madison County records show registrations for seven indentured servants on January 15, 1817: Winn, Hark, Debb (age 9), Barksley (age 42 days), Caroline (age 4), Louisa (age 2), and Moriah (age 6). 9 A bit more information is noted for the five children. The sex and age are given for all four females, but race is left blank. The females also have the following notation: “Moved with Stephenson from Randolph County to Madison County.” 10 Obviously Ben obtained Caroline, Louisa, and Moriah after 1810, but when and where remain a mystery. It is possible that they were children of other servants owned by Stephenson, or that they were purchased from parts unknown. Barksley, the only male child listed, “moved from Randolph to Madison with Stephenson.”11

In 1818, the Illinois Territory became a state. The first official state census was conducted that year to allow for accurate elected representation. Benjamin Stephenson provided the following information for his household:12

Census records at this time listed only the name of the head of household and a total for each category. But we can make educated guesses on individual names from what we already know. The “free white male” is clearly Ben. The “white inhabitants” are Ben and Lucy and their children, Julia, James, Elvira, and Ben V. To determine the identities of “servants or slaves,” we need to refer to the indentures from the previous year. These records document seven servants living with the Stephensons: Winn, Hark, Debb, Caroline, Louisa, Moriah, and Barksley. The eighth “servant or slave” is the only unknown.

The next mention of Stephenson servants occurs on the 1820 federal census. Again, only the name of the head of the household is listed, with a total number of residents given for age and race. Benjamin Stephenson reported the following numbers. 13 (Names of family members have been added here, and did not appear on the original record.)

Examination indicates that some servants are no longer with the household. Barksley was only 42 days old in 1817, when he was registered as Ben’s indentured servant. 14 In 1820 he would have been about three years of age, but there is no listing in the federal census of a child that young. According to probate records for purchases at Isaac Prickett’s store the following year, Ben or Lucy bought “1 checked shirt for Hark” on June 11, 1821, indicating he was still part of the household at that time.15 We can assume that the four female children are Debb (aka Dot), Louisa, Moriah, and Caroline. It is also likely that the adult female slave is Winn.

In July 1821, two more servants were legally registered to Benjamin Stephenson. The first was an adult male, age unknown, by the name of Jess. 16 He was legally claimed as property on July 1, along with his nine-month-old son Washing Will. Jess’s record tells us that his registration was an indenture, that his race was “negro,” and that he was “father of Washing[ton?] Will.” 17 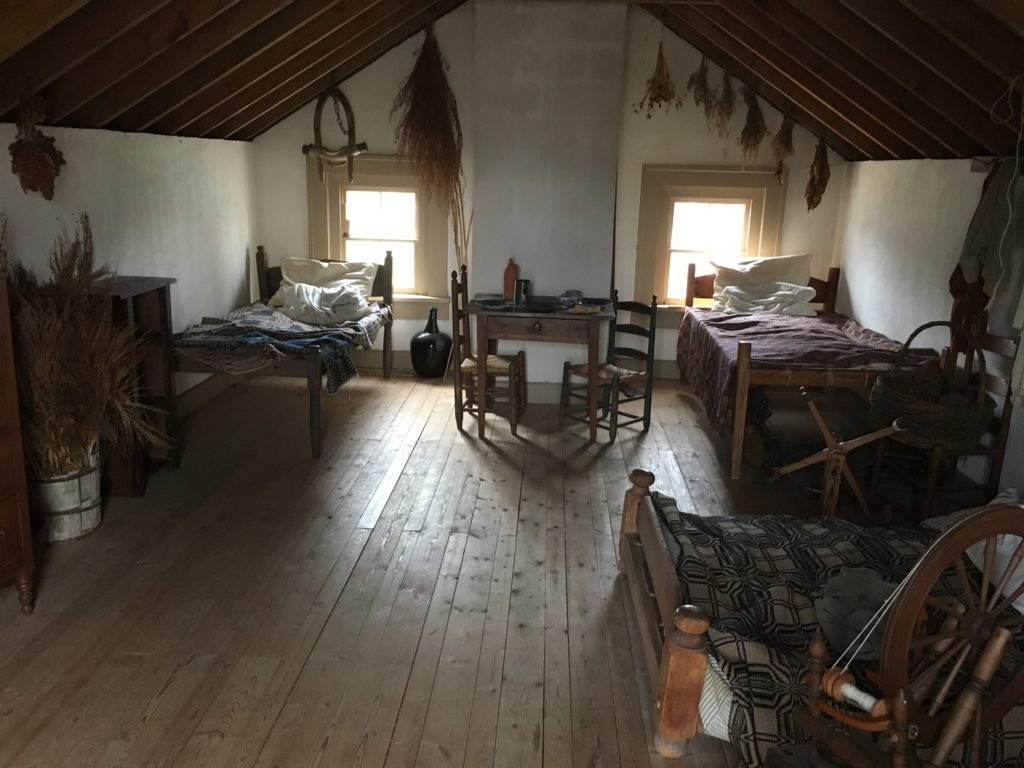 An autumn 1821 item in the Edwardsville Spectator sheds possible light on the intellectual and spiritual life of Stephenson’s servants. A report by the managers of the Female Sunday School Society, dated August 2, advised the community that “[t]wo schools have now for some months been open regularly on the Sabbath, and have been attended, as we believe, with pleasure by those who are most in need of instruction.” One of the Sunday schools was “for the exclusive benefit of coloured people, who attend with great regularity and receive with gratitude and delight that instruction, which (we would observe) cannot otherwise be easily afforded them.”18

There are no known indentures associated with the Stephenson household after 1821. Available probate records give some information, but it is limited. One bill from Isaac Prickett’s store, for example, gives enough detail about three separate purchases that we actually know for whom the items were intended. 19

Tragedy struck the Stephensons in late 1822. Life for the entire household changed when Ben died of malaria on October 10. Because he had no will, his estate began the long process of probate. An inventory was taken of all household contents, while bills owed by Stephenson to others, as well as debts that others owed to him, were recorded for payment. It would be several years before the legal issues ended.

At the estate auction in November 1822, all items listed on the household inventory were sold. Included in this were “one negro man and four children.”20 A value of $1000 was estimated for the five servants. Lucy bought all five servants back from the estate for a total of $401. Names of the five servants were not given in the inventory or the auction records. But it is likely, based on other known documents, that three of the four children were Debb, Caroline, and Washing Will. The identity of the adult male is unknown.

Of all of the servants associated with the Stephenson house, the one for whom we have the most detail is undoubtedly Caroline. We can trace her from her registration in Madison County in 1817 to her release from indentured servitude in 1839. 21 Another Stephenson servant for whom we have some personal information is Jess. Madison County court records show that, in March 1827, Lucy’s servant Jess Price agreed to be sold for $300 to James Mason. 22

A tantalizing reference is made by Lucy herself in a letter dated June 15, 1831. It is potentially an important reference to three of the children formerly indentured to the family. Lucy tells her friend Patty Canal that “Mary, her father & Wash have gone to Ohio, Louisa is going to the female school in the house where Elvira lived last winter.”23

While more research is necessary to prove that the names mentioned in the letter are those of former servants, all three names are those of indentured servants owned by Ben and Lucy in the 1810s to early 1820s. Mary is often a nickname for Moriah, and we know that a Moriah came from Randolph County with the family in 1817. Wash is possibly Washing Will, indentured with his father Jess in 1821. And it is probable that Louisa is the two-year-old child listed in 1817 on Madison County indentures, making her 16 years old at the time of the letter. If these three individuals are in fact former indentured servants, then it is interesting to note the reference to Louisa’s attendance at school.

By 1840, several Stephenson family members were well-established residents of Carlinville, Illinois. Lucy had sold her Federal-style home to Elvira Edwards in 1834, and the household was much reduced in size after her move to Carlinville. Living with Lucy at the time of the 1840 census were one white male (age 20-30), one white female (age 15-20), and one free male of color (age 10-24). 24  No records of emancipation or indenture associated with the Stephensons been found.

The servants of Stephenson House are one of the most intriguing aspects of the home’s history, but the one about which we know the least. Additional research regarding the indentured servants is ongoing. As new information is found, the details of the servants’ lives will add richness and depth to the story of early Edwardsville, the Stephenson family, and slavery in a “free” state.

Cite this article: RoxAnn Raisner, "Slavery and Servitude in the Stephenson House," Madison Historical: The Online Encyclopedia and Digital Archive for Madison County, Illinois, last modified February 19, 2019, https://madison-historical.siue.edu/encyclopedia/slavery-and-servitude-in-the-stephenson-house/.
We are always committed to accuracy in our articles and archive items. If you notice a mistake or have a suggestion, please contact us.