Lucy Stephenson née Swearingen (1788-1850) was a prominent citizen of frontier Illinois and Edwardsville. Her husband was Benjamin Stephenson, Receiver of Public Money in the Federal Land District Office in Edwardsville. She was also one of the founders of the first Presbyterian church in Edwardsville and secretary of the Female Sunday School Society. 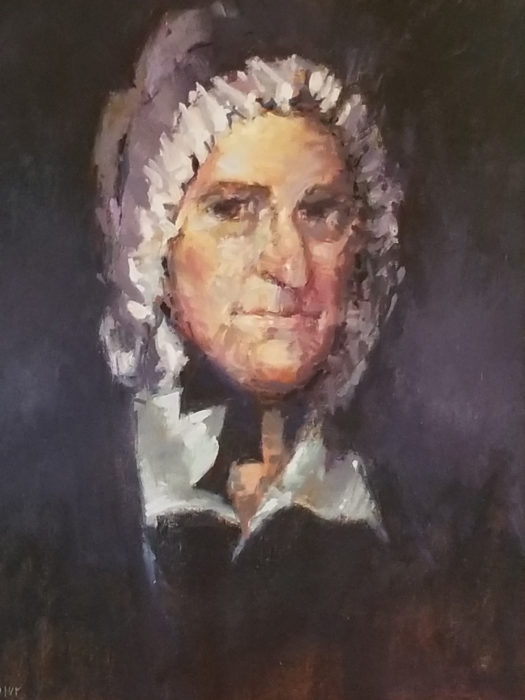 Lucy Swearingen was born December 6, 1788, in a fort on the banks of the Ohio River near present-day Wellsburg, in Brooke County, West Virginia.  She was the second of three children, and the only daughter, of Van “Indian” Swearingen and his third wife, Eleanor “Nellie” Virgin, of Washington County, Pennsylvania.

Lucy married Benjamin Stephenson some time before April 1799, when their names first appeared together as husband and wife in a legal action concerning her inheritance. She was 10, and her husband was 30.  Little is known about the Stephensons’ early married years.

The Stephensons first child, daughter Julia Eleanor, was born at Harper’s Ferry, Virginia on November 28, 1803 when Lucy was 14.  (This date was given in Julia’s 1880 obituary in the Columbia [Missouri] Herald.)  The baby was apparently named after Lucy’s cousin Thomas Swearingen’s wife Julia Lane Swearingen and Lucy’s mother Eleanor “Nellie” Virgin Swearingen Newhouse.

The Stephensons stayed at Harper’s Ferry for a time after Julia’s birth, where Ben bought property.  Between the spring and fall of 1806, however, they were back in what is now Brooke County attending to the settlement of her father’s estate.  Records indicate that their second child, son James, was born there in August 1806.

The couple then moved to Russellville in Logan County, Kentucky, where Lucy again found herself on the frontier.  Tax lists for 1807 show the Stephensons with three parcels of land in Logan County and one parcel in Henderson County.  This property record, the first tax listing for Benjamin Stephenson, includes property of seven slaves (two older than 16) and six horses.

Logan County was a jumping-off point for the Illinois Territory.  It seems apparent that many people were were waiting for the Illinois territory to be established and for President James Madison to appoint officials to the territorial government.  Ninian Edwards was among them, moving to Russellville, becoming by 1808 the chief justice of Kentucky, and eventually appointed the first territorial governor of Illinois.  The Stephensons became friends of Edwards.

The Stephensons lived on a large parcel of land on the Old Whipperwill River, south of Russellville. It was in Logan County that Ben and Lucy’s daughter Elvira Amanda Stephenson (named for Ninian’s wife Elvira Lane Edwards) was born March 23, 1809 (Carlinville [Illinois] Democrat).

As early as July 3, 1809, however, Benjamin Stephenson was in Kaskaskia, Illinois.  On this day Ben, as the first sheriff of Randolph County, met with other officials for the first day of court for the new county.

The federal census for 1810 shows the entire Stephenson family in Kaskaskia, Illinois, indicating that Lucy made the trip northwest with a very young child. The Stephenson household had an unusual number of people that year. The male and two females under the age of 10 were the Stephensons’ children Julia, James, and Elvira.  The three females between 16 and 26 were Lucy and two unknown others-presumably wives or relations of some of the nine men between the ages of 16 and 20 and seven other men between 26 and 45 living with them.  In addition, the census listed five free persons who were not taxed (the indentured servants), for a total of 27 people in the household.

Ben, Lucy, and their children lived in Prairie du Rocher, near Kaskaskia, until the family moved to Edwardsville in late 1816.  The Stephensons’ last child, son Benjamin V. (most likely for Van, in honor of Lucy’s father), was born in Kaskaskia in 1812.

It appears that Lucy remained in the Kaskaskia area from 1813 to 1816, when Ben served as territorial delegate in Washington, D.C. During these years Lucy and Elvira Edwards, the wife of Ninian Edwards, were close friends. Lucy and the children accompanied Ben to the Washington, D.C. area sometime in 1814-1815. In April 1815, Ben wrote a letter to Edwards, saying that the Stephenson family was en route back to Kaskaskia following the end of Ben’s Congressional term.  Edwards himself was away, and his secretary Daniel Cook, who received the letter in his absence, made a note that he had to open it immediately at the insistence of Elvira, who was so anxious for news from Lucy.

Lucy had been born in a frontier fort and had spent most of her married life in small communities on the ever-moving frontier.  The largest town she had lived in was Harper’s Ferry, for a few years around the birth of her first child.   It is believed that during her trip with Ben, when he served as Congressional representative, she did not stay in Washington with him.  Ben arrived in the capital shortly after its burning by British troops in the War of 1812.  The British had destroyed government buildings, the houses of Congress were meeting in a hotel, and men were sleeping many to a room in any available quarters.  The town was no place for a wife and children, one of whom was only two years old.

Lucy typically stayed at home while her husband was away on business, whether it was for duties of office, the War of 1812, or the framing of the Illinois state constitution in 1818.

By late 1816 Ben had opened a general store in Edwardsville and was established as receiver of monies at the territorial land office.  By the fall of 1817 he had a brick home built for his family on Lot #23 and half of Lot #22 in Edwardsville (lots now the parking lot to the north of Rusty’s restaurant).  Reportedly Major Nathaniel Buckmaster built the home, using road dust in place of sand in the mortar mix, which caused the house to crumble.  This may be a myth, however, as the Stephensons sold the house to George Eberhart (after whom Eberhart St. was named) in 1819.  Perhaps the house crumbled a number of years later.  Its demise is mentioned in the 1837 edition of the Gazetteer.

In December 1821 the Stephensons moved into their new home “out in the country.”  Their 18-year-old daughter Julia had married an attorney, Palemon Winchester, on July 15 of the prior year, and therefore no longer lived with them.  Occupying the new home, however, were Ben, Lucy, 9-year-old Ben V., 12-year-old Elvira, and 15-year-old James. 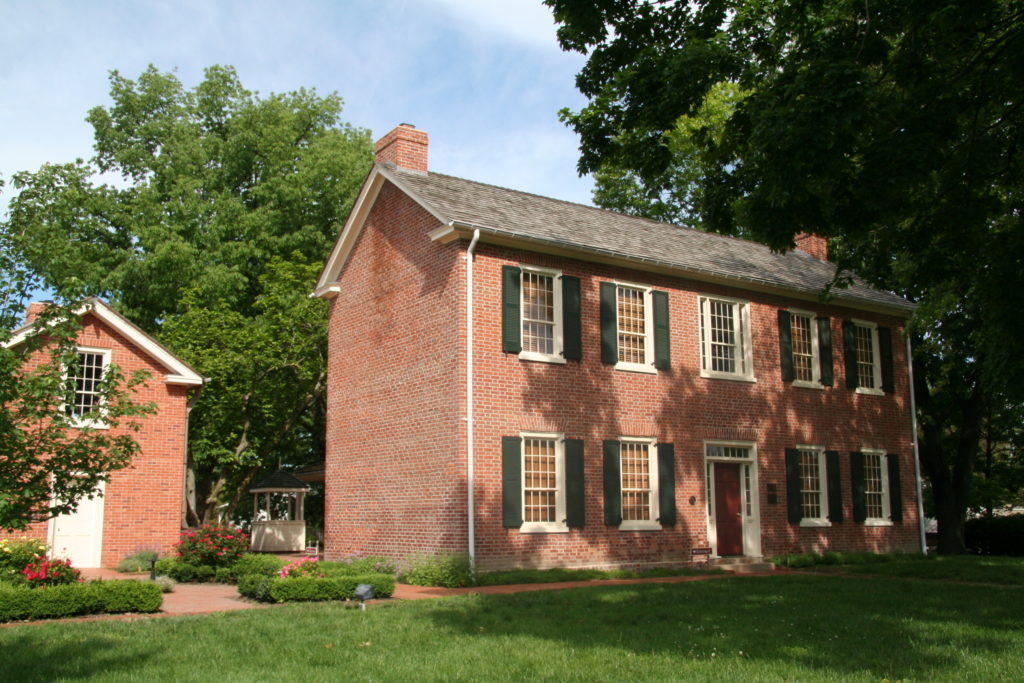 Lucy was involved in a variety of activities during her years in Edwardsville. She is mentioned, for example, in an 1821 Edwardsville Spectator article on the Female Sunday School Society, of which she was secretary.  The society was formed to provide moral instruction to both white and black women.  The Spectator article reports that the society was happy with the attendance and that the black students were happy to be present and liked the institution.   However, the organization needed money, and the public was asked for contributions.  Interestingly, plans were under way to open membership to men, as well.  The report was signed by the organization’s president and by Lucy as secretary.  It is unclear who wrote the article, which may have been a combined effort.

Lucy also helped found the first Presbyterian church in Edwardsville, along with her close friend Elizabeth Smith, widow of a prominent minister.  Both her work with the Female Sunday School Society and the Presbyterian Church give an idea of how Lucy spent some of what free time she had.

The year 1822 brought sorrow and change to the Stephensons. On August 6, 1822, Lucy and Ben’s first grandchild Lucy Ann Winchester, the daughter of Julia and her husband Palemon Winchester, died at the age of 11 months.  Only two months later Ben himself died, apparently from malaria, on October 10, 1822.

Probate records show a bill from James Mitchell’s store in Belleville for mourning materials.  October 23, 1822, purchases included six yards of crepe (a common mourning trim), four pairs of gloves (worn in black by the family and typical gifts to pallbearers or close friends), three additional yards of crepe, and six yards of bombazine (a wool and silk twill fabric commonly used in mourning gowns).  Mourning clothes were needed, and for whatever reason Lucy chose to make her purchases from Mitchell’s rather than from local stores.

A letter the following year indicates where Lucy may have spent much of her energy following Ben’s death.   It also suggests that she moved from the background to the forefront of family and business affairs, and indicates her abilities in the world of business and politics.

In June 1823, ten months after Ben’s death, Lucy received a letter from William H. Crawford of the U.S. Treasury Department, the man to whom Ben had reported in the operations and finances of the territorial land office.  Lucy had written to Crawford seeking answers to various questions, including why her son-in-law Palemon had not been appointed receiver of monies in Ben’s place.  Evidently her original letter was blunt, as was Crawford’s reply.  Crawford indicated in no uncertain terms that he did not trust Palemon.  He further stated that money from the land office that should have been sent to him was missing, and he wanted to know where it was.  The tardiness was undoubtedly due to Ben’s illness in the weeks before his death, during which time he was unable to send anything.  Lucy replied that she had the funds in her possession and had wanted to send them to the Treasury Department, but when she had asked, no one told her where to send a package.

Lucy’s financial condition after Ben’s death is an unanswered question.  Lucy continued to live in the home that she and Ben built in 1820-1821.  It was difficult, however, and her son James, her son-in-law Palemon, and her other son-in-law William Starr seemed to help with finances, taking turns owning the property. In 1834, Elvira Edwards bought the Stephenson home for $2,000, one year after her own husband, Ninian, died.  Today it is generally agreed that she did this to help her friend in a time of need.  Lucy went to Carlinville, where her daughter Julia was living with her own family of seven children.

Lucy bought property in Carlinville and was active in the Presbyterian Church there.  The 1850 census shows her in her own home, along with her daughter Elvira and two girls 12-13 years of age.  One was Lucy’s granddaughter, while the other was apparently a hired servant, as the name does not fit within the Stephenson family genealogy.  Following a long a painful illness, Lucy died in August 1850 at the home of Nicholas Boice, widowed husband of Julia and Palemon’s daughter Marion Winchester.

Cite this article: Karen Campe Mateyka, "Stephenson, Lucy, née Swearingen (1788 – 1850)," Madison Historical: The Online Encyclopedia and Digital Archive for Madison County, Illinois, last modified February 19, 2019, https://madison-historical.siue.edu/encyclopedia/stephenson-lucy-nee-swearingen/.
We are always committed to accuracy in our articles and archive items. If you notice a mistake or have a suggestion, please contact us.